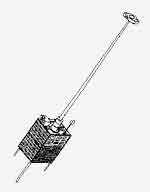 The above image is an artist's concept of Kitsat A with its antenna extended. Image Credit: The Radio Amateur Satellite Corporation

Friday, August 10th, marks the 20th anniversary of the launch of the first Korean Institute of Technology Satellite (Kitsat A / Kitsat 1 / OSCAR 23). This was the first satellite of the Republic of Korea (South Korean). Its successful launch on August 10, 1992, from Guiana Space Centre, made South Korea the 22nd country to orbit a satellite.

Kitsat A was a "piggyback payload," flying into space along with the TOPEX/Poseidon mission. Kitsat A weighed 48.5kg, and it measured 35.2 x 35.6 x 67cm. The instruments aboard included a Packet Radio Mailbox, Digipeater, a CCD camera experiment and a synthesized voice experiment, and Earth Imaging System (EIS), using 2 CCD cameras. As of this writing Kitsat A is still in operation.