MSL/Curiosity: Scene of the Crime! 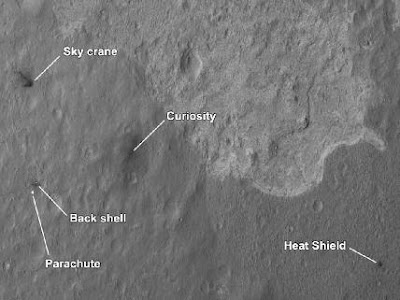 Here is the scene of the crime, so to speak. Following the touchdown of NASA's Mars Science Laboratory (MSL) / Curiosity rover in Gale Crater on Mars, the MSL team wanted to image the landing site as soon as possible. To do this, they turned to the High-Resolution Imaging Science Experiment (HiRISE) aboard the Mars Reconnaissance Orbiter (MRO).

But in order to get an image that quickly, the MSL team knew they had to bend a few rules. They knew that MRO normally rotates a maximum of 30 degrees to the left or right of center during its imaging passes. This is done to minimize the amount of distortion in the surfaces features. But the MRO team had to rotate the orbiter 41 degrees from perpendicular to image the Curiosity landing site. And that angle, combined with the curvature of the surface at that distance, resulted in an image angle of 45 degrees. HiRISE took the imaging pass on August 6th at about 10:30 PM PDT, and then MRO transmitted the data back to Earth over the next few hours.

The resulting image was a great one. The MSL team zoomed into the HiRISE image, studied the surface features and found all of the pieces from the descent. The MSL team has nicknamed this image the "crime scene." Curiosity can bee seen just to the left of center. The heat shield, at the lower right, is about 1200 meters away from the rover. The back shell and parachute, at the lower right, is about 615 meters away. And the crashed "sky crane" (the descent stage) is at the upper right, about 650 meters away from Curiosity.