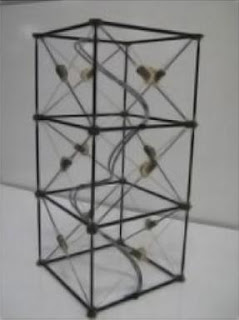 The above image shows the three-bay mast prototype developed by ATK Goleta for the NuSTAR mission. Image Credit: NASA/JPL-Caltech

In February 2006, because of funding pressures within the Science Mission Directorate, NASA cancelled the development of the Nuclear Spectroscopic Telescope Array (NuSTAR). Nineteen months later, on September 21, 2007, NASA announced their decision to restart the program. The launch of NuSTAR was then expected to be sometime in 2011. In its announcement, NASA noted that the work of the NuSTAR mission would bridge the gap between the Wide-field Infrared Survey Explorer (WISE), which would launched in 2009, and the James Webb Space Telescope, which was then estimated to launch in 2013.

Essential to the NuSTAR design was a 10-meter (30-foot) deployable mast. Following launch, the mast would be extended and separate the NuSTAR X-ray optics from the detectors. This distance was necessary for the long focal length inherent to NuSTAR's grazing incidence high energy X-ray optics. Using a deployable structure would allow NuSTAR to launch on a Pegasus XL rocket, one of the smaller launch vehicles available. Previous X-ray missions such as Chandra and XMM-Newton launched fully deployed on larger, more expensive rockets.

NuSTAR's extendable mast was built by ATK Goleta, who specializes in space-based deployable structures. ATK Goleta built structures on the International Space Station, on Mars landers, and a mast that was similar in design, though much larger in scale, that flew in February 2000 on the Space Shuttle Endeavor (STS-99) as part of the Shuttle Radar Topography Mission (SRTM). In order to test and demonstrate the manufacturing techniques and capabilities of the NuSTAR mast, ATK Goleta build a three-bay prototype unit in Spring 2009.