This Saturday, October 8, Earth will pass through the dust trail of Comet 21P/Giacobini-Zinner. Forecasters expect the encounter to produce anywhere from a few dozen to a thousand meteors per hour visible mainly over Europe, northern Africa and the Middle East. The meteors will stream from the northern constellation Draco--hence their name, the "Draconids." 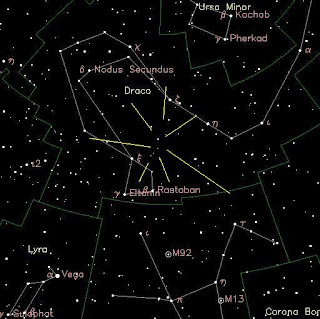 The meteors from the Draconid shower are also called the October Draconids or the Giacobinids. Meteors from the Draconid shower may be visible from October 7 to 10. The rate of the shower is variable and the peak lasts only a few hours. This shower gives a good display only when the parent comet returns to perihelion, which is every 6.5 years. The meteors will appear to originate from a point in the sky near the head of the constellation Draco, the Dragon (RA 17hrs 23min, +57°).

October 9, 1933 - On this Monday night a great, brief, and unexpected Draconid meteor storm was seen over Europe, Asia, Africa and America. The overall rate for the fall was estimated at 5,000 per hour. Observers in Malta recorded a meteor rate of 480 per minute. In Ireland it was reported that the meteors fell as thickly as flakes of snow in a snow storm. Several Russian observers reported more than 100 meteors per minute and in Syria 168 meteors were counted in a 30-minute period. About five hours after the shower had reached its maximum in Europe some of the meteors struck different parts of the United States, but U.S. observers reported lower fall rates up to 10 per minute. The parent comet, Giacobini-Zinner had passed this point in Earth's orbit in July, just three months earlier.

October 10, 1946 - A great Draconid meteor storm was seen over Europe and the United States with an estimated rate of 5,000 per hour.

October 8, 1985 - A Draconid meteor shower was seen with an estimated rate of 400 per hour. The size of the shower came as a surprise to astronomers.

October 8, 1998 - A Draconid meteor shower was seen over Japan and China, with Europe witnessing the tail end of the activity. The shower peaked between 13:00 and 14:00 UT with an estimated rate greater than 500 per hour.