Data Compiled by Alan B. Chamberlin of NASA/Jet Propulsion Laboratory

The charts and tables below show the number of near-Earth asteroids (NEAs) discovered by each of the predominant search programs within each half-year interval. There are two sets of charts and tables. The first set shows statistics for all NEAs while the second set shows statistics for only large NEAs. In this context, "large" is defined as NEAs with absolute magnitudes (H) of 18.0 or brighter. This roughly corresponds to 1 km diameter and larger NEAs. 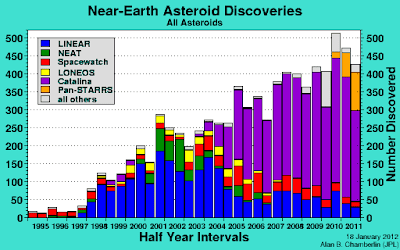 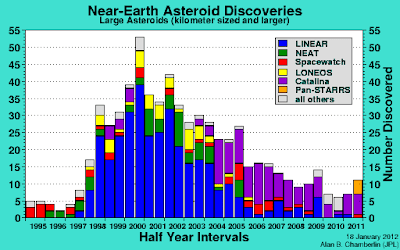 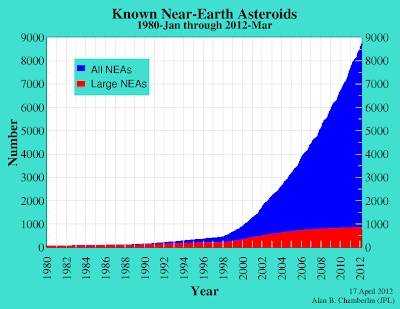 The chart below shows the total known near-Earth asteroids per size bin. Diameters are estimated using an assumed average albedo for NEAs. The first size bin represents NEAs smaller than 30m in diameter. The second represents NEAs with diameters from 30m to 100m, and so on. Data shown in the chart represent known NEAs as of the date shown in the bottom-right corner of the chart. 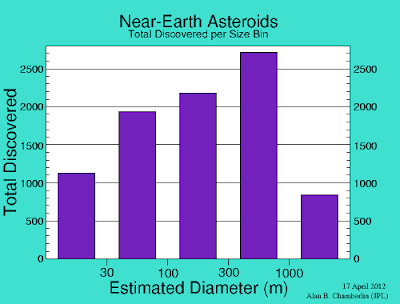 The table below shows the total number of NEOs known at selected dates. The most recent date at the top of the table is generally not the date the table was updated, but rather the discovery date of the most recently discovered NEO. This table is updated daily using discovery data published by the Minor Planet Center. "NEC" are Near-Earth comets. "PHA-KM" and "NEA-KM" are PHAs and NEAs with diameters roughly one kilometer and larger. Other definitions, such as Apollo, are on the NEO groups page.

Spacecraft Missions to Comets and Asteroids

Because comets and asteroids are relatively unchanged leftovers from the solar system formation process, it is important to discern their structures and chemical makeup. These objects formed under the same conditions as did the planets, but unlike the planets, they remained relatively unchanged since their formation. Thus, knowledge of the chemical composition and structure of these objects should offer clues as to the chemical mix and conditions under which the solar system's planets formed 4.6 billion years ago. In addition, information on their compositions and structures will be important should one of them be discovered to be on an Earth threatening trajectory. Knowledge of their compositions and structures will also be important in order to make intelligent choices as to which objects would offer the richest sources of raw materials.

Imager: An imager is a television camera system using a charged-coupled device (CCD) detector (the same type of detector in a camcorder).

IR Spectrometer and UV Spectrometer: This infrared (IR) detector measures the light received in several different infrared portions of the light spectrum. In so doing, this instrument can often infer the minerals resident in a neighboring comet or asteroid. The ultraviolet (UV) spectrometer measures a comet's light in several narrow regions of the ultraviolet spectral region in an effort to identify gases that emit radiation in this region of the spectrum.

X-Ray Spectrometer, Gamma Ray Spectrometer, Alpha/X-ray Spectrometer: These spectrometer instruments are all designed to determine the chemical (elemental) composition of the target body's surface materials (what is the chemical makeup of the surface rocks and soils?). When highly energetic radiation or particles fall upon the asteroid's surface materials, each type of atom in these materials responds by emitting radiation in a characteristic frequency. These characteristic frequencies then identify the atoms that are present in the surface soils. X-rays from the sun provide the incident radiation for the x-ray spectrometer. High-speed atomic nuclei (cosmic rays) from space are responsible for inducing the high frequency radiation measured by the gamma ray spectrometer. The alpha particle spectrometer measures the radiation resulting from the bombardment of helium nuclei (alpha particles) upon the asteroid's surface soils; a radioactive source material (e.g., Curium) in the instrument itself provides the source for these alpha particles.

Impact dust mass spectrometer: Once a dust particle hits this detector at high velocity, the resulting charged particles (ions) interact with a magnetic field within the instrument. Measuring the amount their subsequent trajectories are modified by this magnetic field then identifies the specific ions.

Magnetometer: This instrument measures the intrinsic or induced magnetic field of the target body. The charged particle environment in a comet's atmosphere can trap solar magnetic fields and some asteroids, in analogy with the Earth, may have magnetic fields due to their metallic cores.

Plasma Package: A plasma is a cloud of electrically charged atoms or molecules. Plasma instruments are designed to measure the densities and characteristics of plasma clouds that are created when the neutral molecules in cometary atmospheres become charged as a result to the sun's radiation. Plasma instruments will also be used to monitor the plasma (ion) engines used to drive the DS1 spacecraft.


Spacecraft Missions to Comets and Asteroids

The NEAR mission flew within 1200 km of asteroid Mathilde and spent nearly one year in orbit about asteroid Eros in 2001-2001.

Deep Impact mission will impact the surface of comet Tempel 1 thus creating a fresh crater larger than the size of football field and deeper than a seven-story building. The spacecraft will study the crater formation process and examine the subsurface structure of one of the solar system's most primitive objects, a remnant from the outer solar system formation process.

The primary Deep Space 1 mission objectives were to test space technologies. The spacecraft flew within 2000 km of Comet Borrelly on September 22, 2001.

The STARDUST spacecraft will image the nucleus of Comet Wild-2, collect dust from both the comet's coma and from interplanetary space and bring these dust samples back to Earth for study.

A cooperative mission between Japan and the U.S., the Hayabusa spacecraft rendezvoused with near-Earth asteroid (25143) Itokawa and return asteroid surface samples to Earth for analysis. Itokawa, a 600 meter sized, potato-shaped asteroid, is named after Hideo Itokawa, a Japanese rocket pioneer.

After three Earth gravity assists and a Mars gravity assist, the Rosetta spacecraft rendezvoused with, landed upon, the surface of a comet in an effort to study its composition and structure.

The Dawn mission will orbit two asteroids on a single voyage. Ceres and Vesta evolved under radically different circumstances in different parts of the solar system more than 4.6 billion years ago. By observing both protoplanets with the same set of instruments, Dawn will provide new insight into the formation and evolution of our solar system.