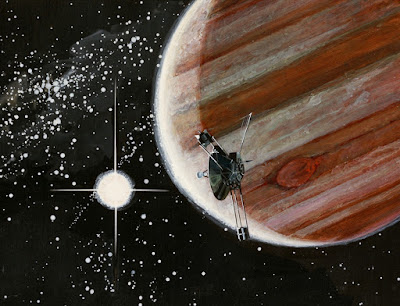 The above animation "blinks" between two images: One taken May 25, 2008, the other taken December 21, 2017. Both show the landing site for NASA's Phoenix Mars Lander. The later image shows the result of dust layering. Image credit: NASA/JPL-Caltech/Univ. of Arizona

A late 2017 image of NASA's Phoenix Mars mission, which landed nearly a decade ago in the norther regions of Mars, shows that dust has covered some marks of the landing.

The Phoenix lander itself, plus its back shell and parachute, are still visible in the image taken December 21, 2017, by the High Resolution Imaging Science Experiment (HiRISE) camera on NASA's Mars Reconnaissance Orbiter. But an animated-blink comparison with an image from about two months after the May 25, 2008, landing shows that patches of ground that had been darkened by removal of dust during landing events have become coated with dust again.

In August 2008, Phoenix completed its three-month mission studying Martian ice, soil and atmosphere. The lander worked for two additional months before reduced sunlight caused energy to become insufficient to keep the lander functioning. The solar-powered robot was not designed to survive through the dark and cold conditions of a Martian arctic winter.

Both images in the animation were taken by the High Resolution Imaging Science Experiment (HiRISE) camera on NASA's Mars Reconnaissance Orbiter. The one with three patches of darker ground -- where landing events removed dust -- was taken on July 20, 2008. The one with a more even coating of pale dust throughout the area was taken on December 21, 2017. Both image cover an area roughly 300 meters wide at 68 degrees north latitude, 234 degrees east longitude.

For more information on the Phoenix Mars Lander, the Mars Reconnaissance Orbiter mission and NASA's Mars exploration program, check out these site.