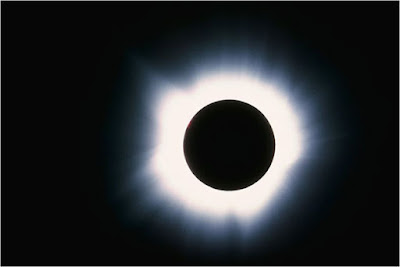 When it comes to looking at the sun, safety comes first! Here are some important questions and answers about solar viewing safety. 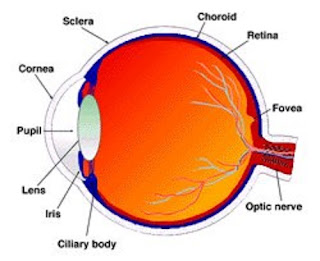 Why is it not safe to look at the sun even when only a small part of it is visible?

The rods and cones in the human retina are very sensitive to light. Even a thin sliver of the sun’s disk covers thousands of these light-sensitive cells. Normally during daylight conditions, the iris contracts so that only a small amount of light passes through the lens and then reaches the retina. This level of indirect sunlight is perfectly OK and the eye has evolved over millions of years to safely see the daylight world under most circumstances. The problem is that the sun’s surface is so bright that if you stare at any portion of it, no matter how small, it produces enough light to damage individual retinal cells.  It takes a few seconds for this to happen, but afterwards you will see a spot as big as the solar surface you glimpsed when you look away from the sun at some other scenery. Depending on how long you gazed at the sun and how badly the retinal cells were damaged,  this spot will either fade away in time or remain permanent.  You should never assume that you can look away quickly enough to avoid eye damage because every person is different in terms of their retinal sensitivity, and you do not want to risk being the one who damages their eyes just to try to look at the sun. If you want to see what the sun looks like, use a properly-equipped telescope. Or just go online and view thousands of pictures taken of the sun by telescopes and NASA spacecraft.

Is it true that you should not look at the sun even during a total solar eclipse?

There is a misunderstanding being circulated that during a total solar eclipse when the moon has fully blocked the light from the sun, that there are still harmful ‘rays’ that can injure your eyes.  This is completely false. When the bright photosphere (the visible surface) of the sun is completely covered, only the faint light from the corona is visible, and this radiation is too weak to have any harmful effects on the human retina.

The misunderstanding comes about because of using the general term ‘solar eclipse’ to describe both the total phase when the sun disk is completely blocked, and the minutes before and after totality when there is still some of the sun’s disk visible. It is harmful to view even a sliver of the sun disk because of its intensity, and so to simply say that you should not view a solar eclipse is rather inaccurate.

Do lunar and solar eclipses have any noticeable effect on humans?

How are eyes damaged by staring at the sun?

Solar retinopathy is a result of too much ultraviolet light flooding the retina. In extreme cases this can cause blindness, but is so painful that it is rare for someone to be able to stare at the sun for that long. Typically, eye damage from staring at the sun results in blurred vision, dark or yellow spots, pain in bright light or loss of vision in the center of the eye (the fovea). Permanent damage to the retina has been shown to occur in approximately 100 seconds, but the exact time before damage occurs will vary with the intensity of the sun on a particular day  and with how much the viewer's pupil is dilated  from decongestants and other drugs they may be taking.  Even when 99% of the Sun's surface (the photosphere) is obscured during the partial phases of a solar eclipse, the remaining crescent Sun is still intense enough to cause a retinal burn. Note, there are no pain receptors in the retina so your retina can be damaged even before you realize it, and by then it is too late to save your vision!

Where can I get the right kind of solar filter to view the eclipse?

Many people will obtain eclipse viewing glasses. To date, three manufacturers have certified that their eclipse glasses and hand-held solar viewers meet the ISO 12312-2 international standard for such products: Rainbow Symphony, American Paper Optics, and Thousand Oaks Optical. These companies may be found online and the glasses ordered, but you really need to order your glasses many months in advance because of the anticipated huge audience that could number in the hundreds of millions. If you are a photographer or amateur astronomer, you will want professional-grade solar filters to cover your binoculars, telescope or camera. Companies like Thousand Oaks Optical and others you can find by using the keyword ‘Solar filters’ have these filters for sale, but again due to the large number of likely customers along the path of totality, you need to order your filter many months in advance. You will also need some time to learn how to use the filter with your optical system, and if you are photographing the eclipse, take lots of test shots to get the right solar disk size and sharpness.

Is it only the bright light that is dangerous when viewing the sun?

Actually, although filters and glasses do safely block the intense sunlight that is known to damage retinas, the infrared ‘heat’ from the sun can also make viewing uncomfortable as it literally warms the eye.  This is why staring at the sun for minutes at a time even with proper filters can still over-heat the tissues and fluids in the eye, and the consequences of this heating can be dangerous as well. To avoid this problem before totality takes place, try not to use your filters without frequently looking-away to cool your eyes. During totality, there is no adverse heating of the eyeball since the solar disk is not visible.

Isn’t this ‘safety’ issue about eclipse viewing, a bit overblown?

Absolutely not!  You cannot look at the sun without suffering severe damage. We have many built-in reflexes to prevent this. The ONLY exception is in viewing solar eclipses. It is an inherently dangerous activity that you have to do very carefully in order not to suffer eye damage. There are specific steps you can take, based on the experience of  thousands of professionals, not only in astronomy but in medicine. So, bottom line: read the safety warnings and make sure you understand how to view the eclipse before  August 21, so that the only lasting impression you have is a wonderful memory of the event, not a damaged retina!


For more information on the eclipse, and how to safely view it, visit: