Saturn eclipsing the sun, seen from behind by the Cassini orbiter. Earth can be seen as a small dot between the rings on the upper, left-hand side. Image Credit: NASA/JPL/Space Science Institute

(My apologies for the "big finish." But because the other phrase is so prevalent, I just had to find something to say other than "grand finale,” at least once.)

The NASA Cassini mission is winding down, quite literally. On April 26, the Cassini spacecraft became the first to dive between Saturn and its ring system. This begins the spacecraft’s “grand finale” in which it will make 22 amazing orbits and, on September 15, enter Saturn’s atmosphere and burn up. The spacecraft will be useful until the very last moment–it will be sending back data continuously, including measurements of the composition of Saturn’s atmosphere, rotation rate and interior structure.

Until that time, the instrument teams have several new observations to make. These include understanding a Saturn radiation belt, discovered inside the rings in 2004, and taking close-up pictures of the rings and other features.

The spacecraft will also image Saturn’s cloud tops at close range, weigh its ring system (which will indicate just how old it is), sample the atmosphere of the planet and its rings, and measure Saturn’s internal structure.

Read the NASA PDF Resource on the Mission (published 1997)

Originally called Cassini-Huygens, the mission involves ESA, NASA and the Italian Space Agency. The idea of the mission began in 1982, when the European Science Foundation and the American National Academy of Sciences formed a working group to investigate future cooperative missions. Two European scientists suggested a paired Saturn Orbiter and Titan Probe as a possible joint mission. In 1983, NASA's Solar System Exploration Committee recommended the same Orbiter and Probe pair as a core NASA project. NASA and the European Space Agency (ESA) performed a joint study of the potential mission from 1984 to 1985. ESA continued with its own study in 1986, while American astronaut Sally Ride, in her 1987 report, also examined and approved of the Cassini mission.

In 1988, NASA Associate Administrator for Space Science and Applications Len Fisk wrote to his counterpart at ESA, Roger Bonnet, strongly suggesting that ESA choose the Cassini mission from the three candidates at hand and promising that NASA would commit to the mission when ESA did.

On October 15, 1997, a Titan IVB/Centaur rocket launched from Cape Canaveral Air Force Station in Florida, sending the Cassini orbiter and its Huygens probe on a seven-year, 2.2-billion mile journey to the Saturn system.

Read About the Spacecraft

The mission arrived at Saturn on July 1, 2004. The mission was originally planned for four years. But Cassini-Huygens was so successful that the mission multiple times, eventually to 2017. It has flown past seven of the larger satellites, including giant Titan – which is larger than the planet Mercury. The orbiter passed Titan more than 70 times. Flying within 880 km of the moon, it studied Titan’s orange clouds and nitrogen-rich atmosphere. It also mapped its surface with an imaging radar.

On Christmas Day 2004, Huygens separated from Cassini. Three weeks later, it entered Titan’s thick atmosphere, becoming the first probe to land on the surface of a planetary satellite (other than Earth’s moon). Protected by a heat shield, the probe slowed from 18,000 to 1,400 km per hour in just three minutes. Soon after, a large parachute opened. At a height of about 160 km, the probe began to take pictures and study the atmosphere. For more than two hours, data from Huygens were received and stored on Cassini as it flew overhead.

To learn more about Cassini, Huygens, Saturn, Titan, the rest of the Saturn system, and the Grande Finale, check out these links.

Read About the Mission

Read the FAQ for Cassini – The Grand Finale

Read the 2017 Article: Bittersweet feeling as Cassini mission embarks on its ‘grand finale’ ahead of death plunge 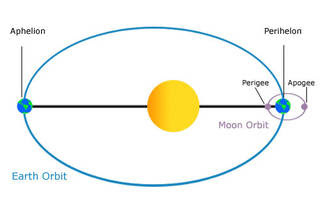 What is an Eclipse?

e-clipse (i-ˈklips) noun. 1. a. The total or partial obscuring of one celestial body by another. b. The passing into the shadow of a celestial body. Compare OCCULTATION, TRANSIT. [Middle English, from Anglo-French, from Latin eclipsis, from Greek ekleipsis, from ekleipein to omit, fail, suffer eclipse, from ex- + leipein to leave]

An eclipse of the moon...

The moon moves in an orbit around Earth, and at the same time, Earth orbits the sun. Sometimes Earth moves between the sun and the moon. When this happens, Earth blocks the sunlight that normally is reflected by the moon. Instead of light hitting the moon’s surface, Earth's shadow falls on it. This is an eclipse of the moon—a lunar eclipse. A lunar eclipse can happen only when the moon is full.

A total lunar eclipse happens when the moon and the sun are on exact opposite sides of Earth. Although the moon is in Earth's shadow, some sunlight reaches the moon. The sunlight passes through Earth's atmosphere, which causes Earth’s atmosphere to filter out most of the blue light. This makes the moon appear red to people watching from Earth. 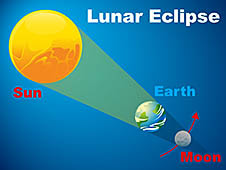 An eclipse of the sun...

Sometimes when the moon orbits Earth, it moves between the sun and Earth. When this happens, the moon blocks the light of the sun from reaching Earth. This causes an eclipse of the sun, or solar eclipse. During a solar eclipse, the moon casts a shadow onto Earth.

The second type of solar eclipse is a partial solar eclipse. This happens when the sun, moon and Earth are not exactly lined up. The sun appears to have a dark shadow on only a small part of its surface.

The third type is an annular (pronounced “ANN-you-ler”) solar eclipse. An annular eclipse happens when the moon is farthest from Earth. Because the moon is farther away from Earth, it seems smaller. It does not block the entire view of the sun. The moon in front of the sun looks like a dark disk on top of a larger sun-colored disk. This creates what looks like a ring around the moon. 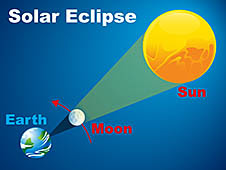 During a solar eclipse, the moon casts two shadows on Earth. The first shadow is called the umbra (pronounced “UM-bruh”). This shadow gets smaller as it reaches Earth. It is the dark center of the moon’s shadow. The second shadow is called the penumbra (pronounced “pe-NUM-bruh”). The penumbra gets larger as it reaches Earth. People standing in the penumbra will see a partial eclipse. People standing in the umbra will see a total eclipse. 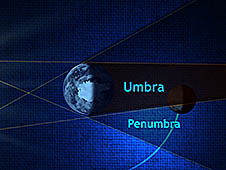 You should never look directly at the sun. It can permanently damage your eyes. You must use proper safety equipment to look at any type of solar eclipse. More on this later.