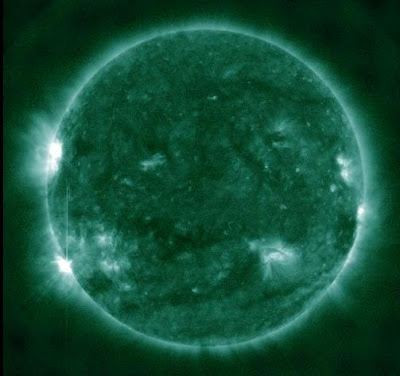 The above image was taken October 10th at 05:04:00 UTC by the Atmospheric Imaging Assembly (AIA), at 94 Angstroms, aboard the Solar Dynamics Observatory (SDO). This was at the time of an M1 x-ray flare just beyond the southeastern (lower-left) limb, produced by a yet-to-be-designated region. Image Credit: SDO/AIA

For the end of October 9th and most of October 10th, the solar activity was moderate. A pair of M1 x-ray events were produced on the 9th at 23:31 UTC and on the 10th at 05:04 UTC by a new region which has not yet rotated around the southeast limb. Active Region 1589 (AR 1589), in the northeastern quadrant, remains the largest and most complex group on the solar disk. The forecast through October 13th: The solar activity is expected to be low with the chance for moderate levels.

Above Earth, the geomagnetic field began the period at minor storm conditions, due to the onset of a coronal hole high-speed stream coupled with residual and lingering coronal mass ejection (CME) effects. Mostly quiet conditions then followed and continued for the remainder of the period. The greater than 2 MeV electron flux at geosynchronous orbit reached high levels during the period. The forecast through October 13th: The geomagnetic field is expected to be quiet to unsettled with isolated active levels on the 11th, as coronal hole effects continue. Mostly quiet conditions are forecast for the 12th and 13th. Stay tuned...