On September 1, asteroid 3122 Florence will become the largest asteroid to fly by Earth since near-Earth asteroids were discovered a century ago. 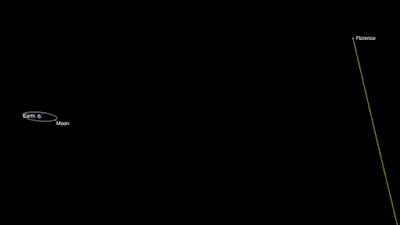 Asteroid 3122 Florence will pass by Earth on September 1, 2017, at a distance of about 4.4 million miles. Image Credit: NASA/JPL-Caltech

Measurements made by the Spitzer Space Telescope and NEOWISE asteroid-hunting instrument suggest that Florence is around 2.7 miles (5 km) in diameter. The asteroid will pass 4.4 million miles from Earth, about 18 times the distance from the Earth to the moon.

Many known asteroids have passed closer to Earth than Florence will, but those were estimated to be smaller. NASA has tracked near-Earth objects since 1998.

The body called Florence was first detected March 2, 1981 by American astronomer Schelte “Bobby” Bus from Australia’s Siding Spring Observatory. The discovery was provisionally labeled 1981 ET3. In 1993, it was acknowledged as asteroid discovery number 3122 and was named 3122 Florence in honor of Florence Nightingale (1820-1910), the founder of modern nursing.

3122 Florence is a stony asteroid of the Amor group, classified as near-Earth object and potentially hazardous asteroid (PAH). It orbits the sun at a distance of 1.0–2.5 AU once every 2 years and 4 months (859 days). Its orbit has an eccentricity of 0.42 and an inclination of 22° with respect to the ecliptic. The PHA classification is due to both the body’s absolute magnitude (H ≤ 22) and its minimum orbit intersection distance (MOID ≤ 0.05 AU).

For visual astronomers, 3122 Florence will be clearly visible in the night sky beginning August 27. On September 1, 3122 Florence will pass 0.04723 AU (7,066,000 km; 4,390,000 mi) from Earth, brightening to apparent magnitude 8.5, when it will be visible in small telescopes for several nights as it moves through the constellations Piscis Austrinus, Capricornus, Aquarius and Delphinus.

Florence is just one of a few bodies passing Earth this year. In January, asteroid 2017 AG13 snuck up on astronomers. The body was between 36 and 111 feet wide and passed Earth at half the distance to the moon. Another asteroid in the same size range, 2012 TC4, is scheduled to pass roughly one-fourth the distance to the moon—between 4,200 miles and 170,000 miles—on October 12, 2017.

The size and proximity of Florence make it a perfect target for ground-based radio telescope observations. Radar imaging is planned at NASA's Goldstone Solar System Radar in California and at the National Science Foundation's Arecibo Observatory in Puerto Rico. The resulting radar images will show the real size of Florence and could reveal surface details as small as about 30 feet (10 meters).

Currently, NASA is tracking 1,826 near-Earth objects classified as Potentially Hazardous Asteroids, which have some risk of striking Earth in the future. Among those are several larger than Florence, including 1999 JM8 at 4.3 miles across, 4183 Cuno at 3.5 miles across and 3200 Phaeton at 3.2 miles across. None have come as close as Florence. Florence won’t make a closer pass until around the year 2500.

More information about asteroids and near-Earth objects can be found at: