Astronomy is for Everyone, Part Four

Welcome back to our series on getting started right in amateur astronomy. Last time, we looked at telescopes. This time, the mounts…

The mount of a telescope is just as important as the telescope itself, if not more so. A telescope is of little use if it cannot be kept steadily aimed at the object of interest. There are two main types of telescope mountings: equatorial and altazimuth.

The equatorial mounting is designed to be set up in a certain way in a specially prepared location. In its simplest form, the equatorial has two axes at right angles to each other. It is an all-purpose mounting, generally used for serious work. Some equatorials have setting circles, which make it possible to aim the instrument automatically at the right point in the heavens. 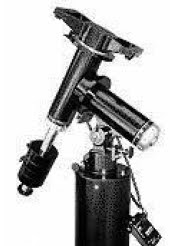 Above is a German Equatorial mount attached to a pier. Image Credit: Author

The altazimuth mounting is simpler to operate than the equatorial mounting. It allows two motions of the telescope - up and down, an "altitude" motion; and horizontal, an "azimuth" motion. This is a good general-purpose mounting. It can be made light, portable, and easy to take down and set up.

Above is a Dobsoinan Altazimuth (a "Dob") mount. Image Credit: Author

Altazimuth - A mount in which the telescope is allowed to pan around in the horizontal plane (azimuth) and pivot up and down in the vertical plane (altitude).

Dobsonian Altazimuth – Also just called a “Dobsonian” or a “Dob,” it is a modified form of altazimuth mounting that has become popular in recent decades for short-focus reflecting telescopes. It is named after John Dobson, an American amateur astronomer. The Dobsonian mount is noted for its low cost and portability.

Equatorial - A mounting which directly counteracts the Earth's axial spin and makes it easier to track objects while you are observing. One axis (called the polar axis) is aligned so that it points directly at the north celestial pole. The other axis of the mounting is called the declination axis. It allows the telescope to move up and down in declination (north and south of the celestial equator).

Fork-type Equatorial - also called a fork mount, it is a design which has become widely used for catadioptric telescopes.

German Equatorial - the most popular type of equatorial mount design. 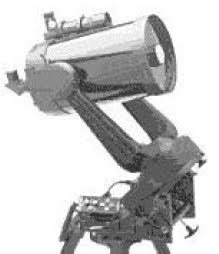 In our next installment, cameras (film and CCDs)…