Today is the peak of the Arid meteor shower. This is a southern-hemisphere shower and can best be viewed from south of Earth's equator. Its meteors may be visible from March 14 through 18 with the peak on March 16. The meteors have a modest rate of 5 per hour. They appear to originate from a point in the constellation of Ara, the Altar (Right Ascention 16 hours 20 minutes, Declination -48°). Saddly, if you cannot see the constallation Ara in your nighttime sky, you will not be able to enjoy this shower. The Arid shower is also known as the Corona Australid shower, after the nearby constellation Corona Australis, the Southern Crown. 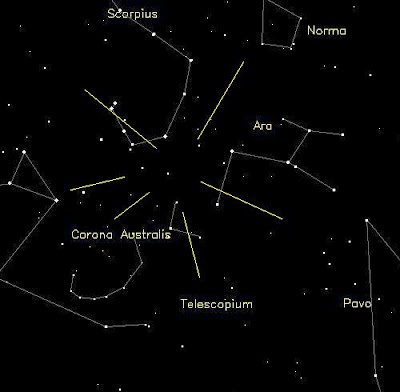 The above image depicts the area around the radiant of the Arid meteor shower. The bright yellow lines near the center of the image suggest the point in the sky out of which the Arid meteors will appear to radiate. The outlines of the surrounding constellations are marked and labeled. (The image was produced using Your Sky software by John Walker, available online at www.fourmilab.ch/yoursky/ )