NASA’s New Horizons mission is well on its way to distant Pluto and the Kuiper Belt. The spacecraft is currently projected to fly-by Pluto on July 14, 2015. In an effort to keep the mission in the public spotlight, an effort is underway to petition the United States Postal Service to publish a stamp in 2015 which promotes the New Horizons mission. 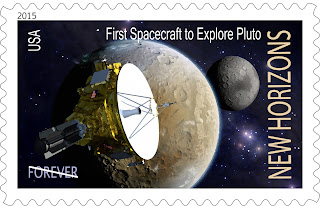 
As of March 7, the petition has collected just over 10,000 of the desired 100,000 signatures. If you would like to take sign this petition Click This Link to take you to the online signing page. And you better hurry. The petition will be available through March 13.
Launched from Cape Canaveral on January 19, 2006, New Horizons is the first mission in NASA's New Frontiers missions and the first of any mission to visit distant Pluto and the Kuiper Belt. Following the Pluto fly-by, the spacecraft will be directed to fly-by one or more Kuiper belt objects if candidates can be identified.