Before and After on "Murray Ridge"

Sometime between December 26, 2013 and January 8, 2014, a span of just 13 days, a bright rock came into view near NASA's Mars Exploration Rover Opportunity, on "Murray Ridge," a section of the rim of Endeavour Crater where Opportunity is working on north-facing slopes during the rover's sixth Martian winter. The images below show the evidence of the appearance. 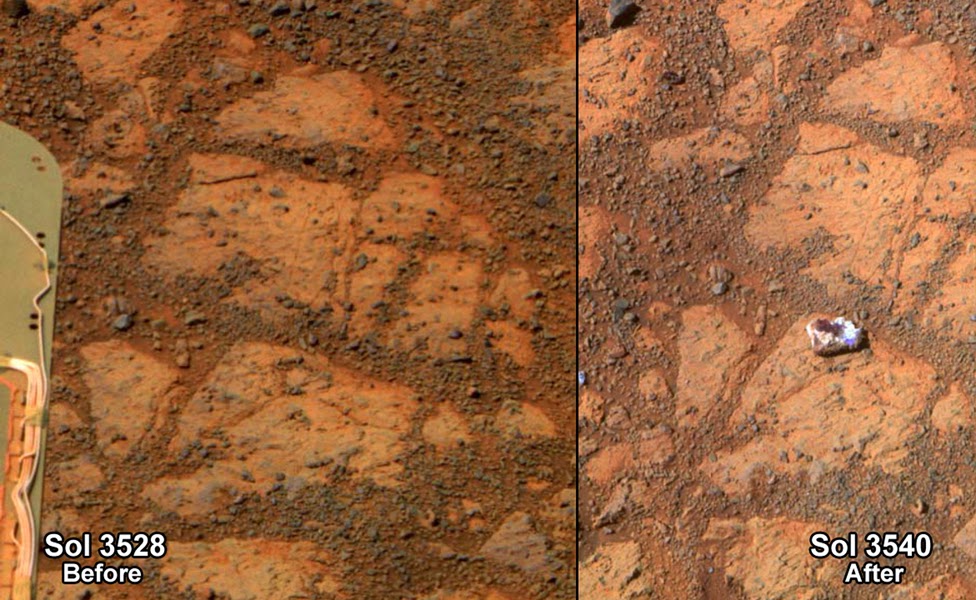 The Opportunity rover had completed a short drive just before taking the second image, and one of its wheels likely knocked the rock -- dubbed "Pinnacle Island" -- to this position. The rock is about the size of a doughnut.

The above images are from Opportunity's panoramic camera (Pancam). The one on the left is from 3,528th Martian day, or sol, of the rover's work on Mars (December 26, 2013). The one on the right, with the newly arrived rock, is from Sol 3540 (January 8, 2014). Much of the rock is bright-toned, nearly white. A portion is deep red in color. Pinnacle Island may have been flipped upside down when a wheel dislodged it, providing an unusual circumstance for examining the underside of a Martian rock.

Opportunity landed on Mars on January 24, 2004 PST (January 25, 2004 UTC) on what was to be a three-month mission, but instead the rover has lived beyond its prime mission and roved the planet for nearly 10 years. Mission highlights, including a gallery of selected images from both rovers is at http://mars.nasa.gov/mer10/.