Here is an update on NASA’s intrepid little robotic explorer called MESSENGER. On September 29, MESSENGER successfully flew by Mercury for the third time in its journey, gaining a critical gravity assist that will enable it to enter orbit about Mercury in 2011. MESSENGER also captured addition images of the planet surface, bringing the total now to 90 percent. 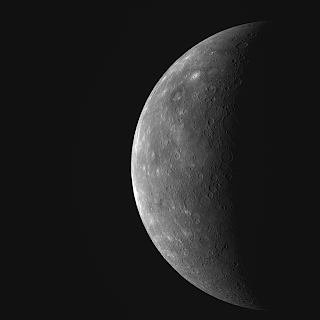 The above images is one of those taken by MESSENGER on
September 29, during its third flyby of Mercury. Image Credit: NASA
For clarification, this is the NASA Discovery mission called MErcury Surface, Space ENvironment, GEochemistry, and Ranging—or MESSENGER for short—is a scientific investigation of the planet Mercury and the first space mission designed to orbit the planet. The mission’s anagram is a nod to the winged messenger of the gods in Roman mythology—Get it? Messenger? Oh, never mind…

MESSENGER passed by Mercury at an altitude of 142 miles and at a relative velocity of more than 12,000 mph. As the spacecraft approached the planet, MESSENGER’s Wide Angle Camera captured portions of Mercury's surface that had remained unseen by spacecraft even after the three flybys by Mariner 10 in 1974 and 1975 and by MESSENGER’s two earlier flybys in 2008.

This was MESSENGER’s last opportunity to use the gravity of Mercury to adjust its trajectory without using its limited fuel supply. You see, like many of us who travel today, MESSENGER is traveling smarter and cheaper, though often taking longer to get where its going. The “smarter and cheaper” comes from the fact that messenger has used gravity-assist maneuvers to gain momentum and direction from multiple flybys of various solar system bodies along its journey, including Earth, Venus and Mercury. By using this technique, the spacecraft conserves fuel and also doesn’t have to carry as much. This allows the spacecraft to be smaller, lighter, and require less of a boost to get on its way. But then there is the “taking longer” aspect, which comes from the fact that MESSENGER is in a solar orbit and so must wait up to one orbit of the sun before it catches up with a given gravity-assisting body to perform the flyby maneuver. MESSENGER was launched on August 3, 2004 aboard a Boeing Delta II rocket from Cape Canaveral Air Force Station, Florida. The spacecraft has now performed three close-up flybys of the planet Mercury, and will finally enter orbit in March of 2011 and begin a year of study of our innermost planet.

The MESSENGER spacecraft has a scientific payload including seven instruments that gather data. One is the Mercury Dual Imaging System (MDIS), a camera with wide and narrow fields-of-view, for monochrome, color, and stereo imaging. Another is the Gamma-Ray and Neutron Spectrometer (GRNS), which maps the elemental makeup of Mercury’s crust. The third is the X-Ray Spectrometer (XRS), also used to map elemental abundances in crustal materials. The fourth is the Magnetometer (MAG), which maps the detailed structure and dynamics of Mercury's magnetic field and magnetosphere and searches for regions of magnetized crustal rocks. The fifth instrument is the Mercury Laser Altimeter (MLA), which measures the planet’s topography. The sixth is the Mercury Atmospheric and Surface Composition Spectrometer (MASCS), which measures the abundance of atmospheric gases and detects minerals in surface materials. And the seventh instrument is the Energetic Particle and Plasma Spectrometer (EPPS), which measures the makeup and characteristics of charged particles within and around Mercury's magnetosphere.

In addition to these, a radio scence investigation uses MESSENGER's telecommunications system to monitor the Doppler effect–the shift in the frequency of the spacecraft's radio signal with changes in the spacecraft's velocity relative to Earth–to measure Mercury's mass distribution, including spatial variations in crustal thickness.

Along with the instruments and experiments, MESSENGER has other necessities for the mission. It has a sunshade to protect the spacecraft from direct sunlight, allowing the electronics and instruments to operate at room temperature even in the hot Mercury environment. MESSENGER has a solar array and battery to collect and distribute power to intruments and other systems. And the craft has liquid chemical-fuled thrusters which perform fuel burns to change its trajectory and attitude.

For more on the MESSENGER mission and to keep up on the latest events, check out the mission home page.