The Number of Sunspots is Growing

The Sun is beginning to show more signs of life. Sunspot 1029 came into our view over the weekend, and is just bristling with B- and C-class solar flares. The sunspot’s magnetic polarity indicate that it is part of new Solar Cycle 24. If it continues to grow at its current rate, this sunspot could soon become the biggest of 2009. 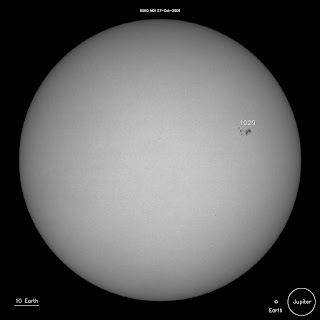 While we are on the subject of the Sun, I should mention that there are a lot of solar missions currently flying, with more expected in the next few years. Here is a rundown of the most notable missions in progress.

NASA/ESA’s Solar and Heliospheric Observatory (SOHO)
Launched December 2, 1995, this international mission has been keeping a steady watch on the Sun. The SOHO team has been able to warn Earth of approaching coronal mass ejections that could potentially disrupt communications. Through the work of professionals and amateurs, SOHO has discovered dozens of comets, many of which are destroyed by the Sun’s powerful gravity and energy.
http://sohowww.nascom.nasa.gov/

NASA’s Transition Region and Coronal Explorer (TRACE)
Launched April 2 ,1998, TRACE studies the three-dimensional magnetic structures which emerge through the Sun’s photosphere (the visible surface of the Sun) and defines both the geometry and dynamics of the upper solar atmosphere (the transition regioun and corona).
http://nssdc.gsfc.nasa.gov/nmc/spacecraftDisplay.do?id=1998-020A

NASA’s ACRIM Sat
Launched December 20, 1999, ACRIMSat is the third in a series of long-term solar-monitoring satellites. The spacecraft tracks the impact of Total Solar Irradiance (TSI) on Earth's climate.
http://acrim.jpl.nasa.gov/

NASA’s Reuven Ramaty High-Energy Solar Spectroscopic Imager (RHESSI)
Launched February 5, 2002, RHEESI uses X-ray imaging to explore the basic physics of particle acceleration and explosive energy release in solar flares -- gigantic explosions in the atmosphere of the Sun. RHESSI produced the first high-resolution movies of solar flares using their high-energy radiation. It also made the first images of a flare in gamma-rays, discovered strong polarization in a cosmic gamma-ray burst; and made the first hard X-ray imaging spectroscopy of flares from thermal to non-thermal energies. RHESSI also measured the roundness of the sun with unprecedented precision and found it is not a perfect sphere. The mission is named in honor of one of the founding mission members who died in 2001, Reuven Ramaty.
http://hesperia.gsfc.nasa.gov/hessi/index.html

Hinode (Solar-B)
Launched September 22, 2006, Hinode is an international mission to study the Sun. The spacecraft is designed to study the generation, transport and dissipation of magnetic energy from the photosphere to the corona and will record how energy stored in the sun's magnetic field is released. Hinode found the Sun's magnetic field is much more turbulent and dynamic than previously known. Spacecraft data showed magnetic waves play a critical role in driving the solar wind, a stream of electrically charged gas blasted away from the Sun. Better understanding of the solar wind may lead to more accurate prediction of damaging radiation waves before they reach satellites. The name Hinode is Japanese, meaning “sunrise.”
http://solarb.msfc.nasa.gov/

STEREO
Launched September 18, 2006, STEREO is actually two observatories. One moves ahead in Earth’s orbit and the other trails behind. These study the structure and evolution of solar storms as they blast from the Sun and move out through space. STEREO has made the first 3D measurements of a solar jet and is still sending information back to Earth from orbit.
http://stereo.gsfc.nasa.gov/

Interstellar Boundary Explorer (IBEX)
Launched October 19, 2008, IBEX is designed to detect the edge of our solar system. Operating from Earth orbit, the spacecraft uses neutral atom images to detect particles from the termination shock at the boundary between our solar system and interstellar space. IBEX made the first all-sky maps of the heliosphere. One of the immediate results was a surprise: the maps are bisected by a bright, winding ribbon of unknown origin. The finding could change our understanding of the heliosphere.
http://www.ibex.swri.edu/