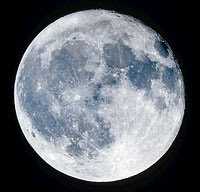 Earth's Moon. Image Credit NASA.
InOMN provides the opportunity for the general public, NASA partners, and amateur astronomers to learn about lunar science and to view the Moon - many for the first time - through telescopes.
InOMN began last August as a celebration of the successful journey of NASA’s Lunar Reconnaissance Orbiter (LRO) around the Moon (http://www.nasa.gov/lro/). After the launch of LRO on June 18, 2009, Goddard's Education and Outreach Team hosted the event, "We're at the Moon!" The same day, the event "National Observe the Moon Night," was hosted at NASA's Ames Research Center (ARC) in Moffett Field, California by the Lunar Crater Observation and Sensing Satellite and NASA Lunar Science Institute (NLSI) teams. NLSI is based at NASA Ames. This year, both teams decided to expand the event by partnering with other NASA institutions, organizations and communities around the world.
Tonight the moon will be a waxing gibbous, about 82% of full. In the Tampa Bay area the Moon rises about 3:25 PM and sets about 2:40 AM.
Visit this link to find out more about International Observe the Moon Night: http://observethemoonnight.org/
...and visit this link to find observing locations in your area hosted by participating organizations.
http://observethemoonnight.org/getInvolved/attend.cfm

Scientists think that on the moon humans will develop technologies to survive in the infinite frontier of space, because the moon presents the same challenges that humans will encounter throughout the universe: harmful radiation, electrified dust, and extreme temperatures. 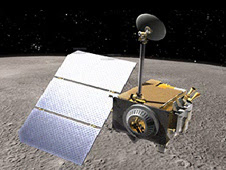 Artist concept of the Lunar Reconnaissance Orbiter (LRO). Image Credit: NASA
Just as a scout finds the safest way for expeditions on Earth, NASA sent a robotic scout, called the Lunar Reconnaissance Orbiter (LRO), to gather crucial data on the lunar environment that will help astronauts prepare for long-duration lunar expeditions.
LRO will spend at least a year in a low polar orbit approximately 50 kilometers (31 miles) above the lunar surface, while its seven instruments find safe landing sites, locate potential resources, characterize the radiation environment and test new technology.
Learn more about LRO at the mission site: http://www.nasa.gov/lro/
More on the Moon
The moon is Earth's only natural satellite and the only astronomical body other than Earth ever visited by human beings. The moon is the brightest object in the night sky but gives off no light of its own. Instead, it reflects light from the sun. Like Earth and the rest of the solar system, the moon is about 4.6 billion years old. 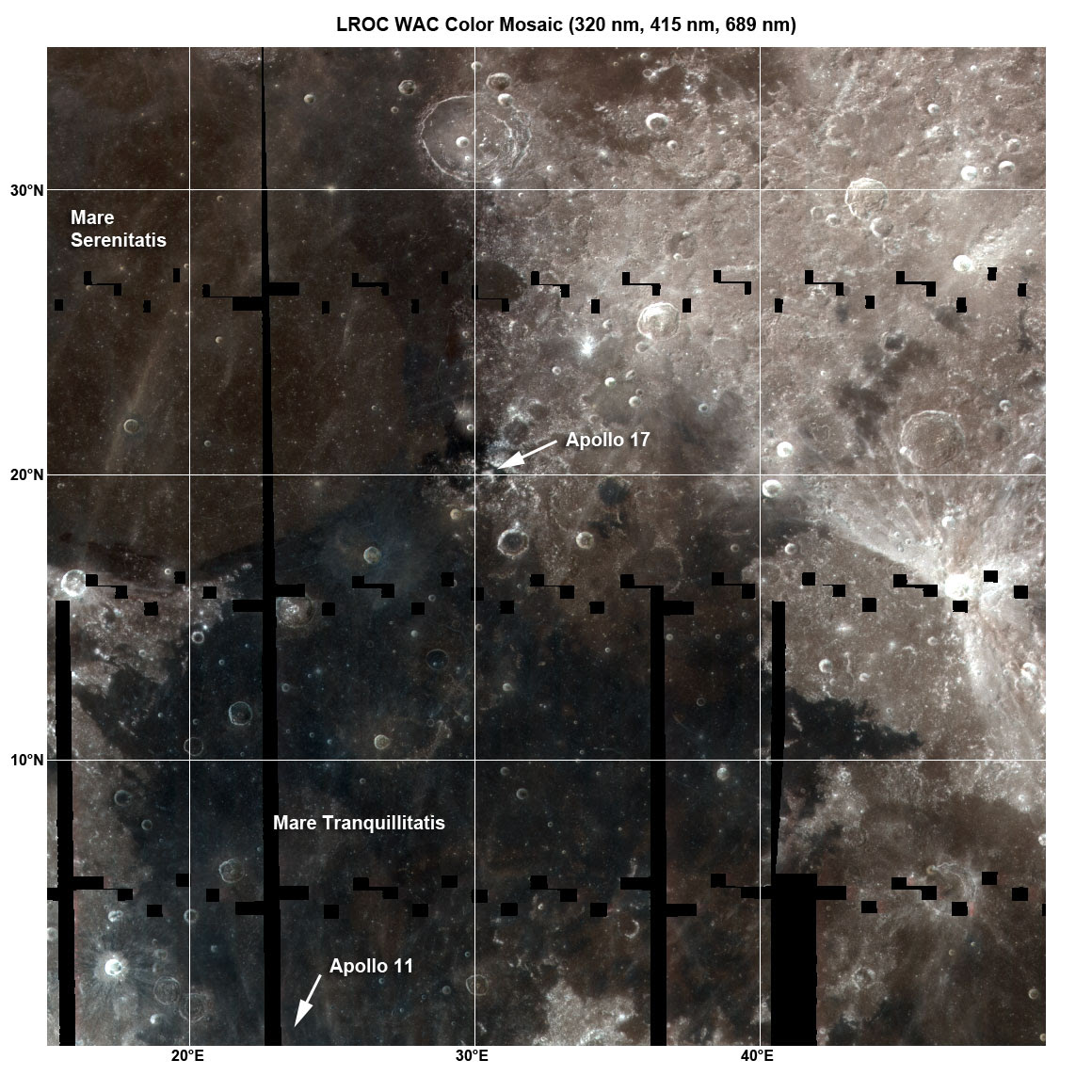 The LRO imaging tools are busily mapping the Moon in 7 UV and visible wavelengths (320 nm through 689 nm). This color composite shows 320 nm light in blue, 415 nm in green and 689 nm in red, scene is ~1000 km wide. Credit: NASA/GSFC/Arizona State University
The moon is much smaller than Earth. The moon's average radius (distance from its center to its surface) is 1,079.6 miles (1,737.4 kilometers), about 27 percent of the radius of Earth.
The moon is also much less massive than Earth. The moon has a mass (amount of matter) of 8.10 x 1019 tons (7.35 x 1019 metric tons). Its mass in metric tons would be written out as 735 followed by 17 zeroes. Earth is about 81 times that massive. The moon's density (mass divided by volume) is about 3.34 grams per cubic centimeter, roughly 60 percent of Earth's density.
Because the moon has less mass than Earth, the force due to gravity at the lunar surface is only about 1/6 of that on Earth. Thus, a person standing on the moon would feel as if his or her weight had decreased by 5/6. And if that person dropped a rock, the rock would fall to the surface much more slowly than the same rock would fall to Earth.
Despite the moon's relatively weak gravitational force, the moon is close enough to Earth to produce tides in Earth's waters. The average distance from the center of Earth to the center of the moon is 238,897 miles (384,467 kilometers). That distance is growing -- but extremely slowly. The moon is moving away from Earth at a speed of about 1 1/2 inches (3.8 centimeters) per year.
The temperature at the lunar equator ranges from extremely low to extremely high -- from about -280 degrees F (-173 degrees C) at night to +260 degrees F (+127 degrees C) in the daytime. In some deep craters near the moon's poles, the temperature is always near -400 degrees F (-240 degrees C).
The moon has no life of any kind. Compared with Earth, it has changed little over billions of years. On the moon, the sky is black -- even during the day -- and the stars are always visible.
A person on Earth looking at the moon with the unaided eye can see light and dark areas on the lunar surface. The light areas are rugged, cratered highlands known as terrae (TEHR ee). The word terrae is Latin for lands. The highlands are the original crust of the moon, shattered and fragmented by the impact of meteoroids, asteroids, and comets. Many craters in the terrae exceed 25 miles (40 kilometers) in diameter. The largest is the South Pole-Aitken Basin, which is 1,550 miles (2,500 kilometers) in diameter.
The dark areas on the moon are known as maria (MAHR ee uh). The word maria is Latin for seas; its singular is mare (MAHR ee). The term comes from the smoothness of the dark areas and their resemblance to bodies of water. The maria are cratered landscapes that were partly flooded by lava when volcanoes erupted. The lava then froze, forming rock. Since that time, meteoroid impacts have created craters in the maria.
The moon has no substantial atmosphere, but small amounts of certain gases are present above the lunar surface. People sometimes refer to those gases as the lunar atmosphere. This "atmosphere" can also be called an exosphere, defined as a tenuous (low-density) zone of particles surrounding an airless body. Mercury and some asteroids also have an exosphere.
Learn more about our moon at these sites:
NASA’s Lunar Reconnaissance Orbiter (LRO) Mission:
http://www.nasa.gov/lro/
Earth’s Moon - NASA’s Solar System Exploration site:
http://solarsystem.nasa.gov/planets/profile.cfm?Object=Moon