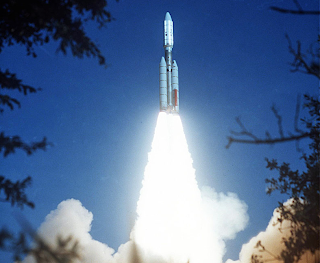 Voyager 2 was launched on August 20th, 1977, from the NASA Kennedy Space Center at Cape Canaveral in Florida, propelled into space on a Titan/Centaur rocket. Image Credit: NASA/JPL-Caltech

Voyager 2 was launched on August 20th, 1977, from the NASA Kennedy Space Center at Cape Canaveral in Florida, propelled into space on a Titan/Centaur rocket. (Image Credit: NASA/JPL)

The Voyager 2 spacecraft was launched on August 20, 1977. It was built (along with its identical twin Voyager 1) to explore the outer planets of our solar system – namely Jupiter, Saturn, Uranus and Neptune. It did all that, and to this day is the only spacecraft to visit Uranus and Neptune. On top of that, Voyager 2 is the longest operating spacecraft in human history. It surpassed Pioneer 6, which launched on December 16, 1965, and sent its last signal back to NASA’s Deep Space Network on December 8, 2000.

Today, Voyager 2 is over 15.2 billion kilometers from Earth. At the speed of light, it would take about 14 hours to get from Earth to Voyager 2.

Voyager 1's 36th birthday will be September 5, 2012 – and in spite of launching a couple weeks after Voyager 2, Voyager 1 is even further away: Voyager 1 is over 18.6 billion kilometers away from Earth, or over 17 hours of light-travel time.

The Voyager mission was planned because of an uncommon alignment of the four outer planets – Jupiter, Saturn, Uranus, and Neptune – which allowed all the planets to be visited in a single mission. Voyager 1 visited Jupiter and Saturn and then used a gravity assist/slingshot from Saturn and headed north – directly towards the edge of the solar system. Voyager 2 took a less direct route to the edge (which explains why it isn’t as far away) visiting Jupiter, Saturn, Uranus, and finally Neptune before using a gravity assist/slingshot to head towards the edge of the solar system in a southerly direction.

Both Voyagers are currently in a region of space called the Heliopause, which is the outermost layer of the Heliosphere where the solar wind is slowed by the pressure of interstellar gas. They are on the very edge of our solar system, and based on the data that the spacecraft are sending back to Earth, it is suspected that they will “break through” into interstellar space in the very near future (“near future” meaning it could be months or a few years). Some think Voyager 1 has transitioned into interstellar space, though more data and time is needed to determine that. Both spacecraft are travelling about 60,000km/h, though Voyager 1 is travelling slightly faster than Voyager 2. Their radioisotope thermoelectric generators will be able to sustain sufficient electrical output to operate until 2020, or possibly until 2025.

Some key dates for Voyager 1:

Some key dates for Voyager 2: