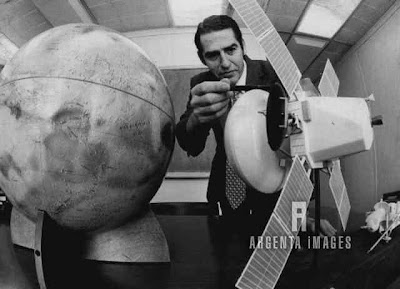 Robert Samuel Kraemer, NASA’s former director of planetary exploration who was also an expert in rocket engines, died August 20 at an assisted living center in Catonsville, Maryland. He was 84. The cause was complications from a fall at his home two months ago.

Kraemer joined NASA in 1967 and, in one of his early assignments, managed the development of a Mars surface laboratory mission at NASA’s headquarters in Washington.  After the project was canceled because of congressional concerns, he was appointed manager of advanced planetary programs and technology and in 1970 was named director of planetary programs. Kraemer oversaw the successful completion of 12 missions to launch spacecraft into the solar system to study its planets, moons and more. He faced political, financial and technical challenges in managing an unprecedented surge of planetary exploration that produced groundbreaking results. Kraemer was associated with the missions Mariner 9 and 10, Pioneer 10 and 11, Helios 1 and 2, Viking 1 and 2, Voyager 1 and 2 and Pioneer Venus 1 and 2. Kraemer was described as a very technically competent and a very good engineer, and he was very good at picking the right people for the right job.

The son of a citrus rancher and a homemaker, Kraemer was born on October 21, 1928, in Fullerton, California, and raised in Placentia, Calif. He received a bachelor’s degree in aeronautical engineering from the University of Notre Dame in 1950.

After receiving a master’s degree in aeronautics and rocket propulsion from the California Institute of Technology in 1951, he worked for North American Aviation’s Rocketdyne Division in Canoga Park, California, on rocket propulsion for a secret intercontinental cruise missile called Navaho.

After Rocketdyne, Kraemer then worked as chief engineer for space systems at Ford Aeronutronic in Newport Beach, California, where he worked until he joined NASA. He retired in 1990.

Kraemer wrote several books, including Rocketdyne: Powering Humans into Space and Beyond the Moon: A Golden Age of Planetary Exploration 1971-1981. He received the Distinguished Service Medal, NASA’s highest honor.

Kraemer is survived by his wife of 59 years, Anne Park Kraemer of Catonsville; six children, David Kraemer and Anita Kraemer, both of Catonsville, Timothy Kraemer of Germantown, Md., Stephen Kraemer of Athens, Ga., Kathryn McCoy of Kensington and Joan Compere of Ellicott City; two brothers; a sister; and 11 grandchildren.