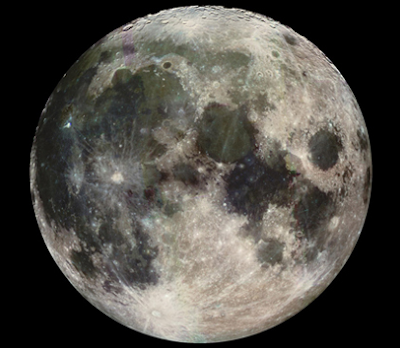 The Galileo spacecraft sent back this image of the Moon as it headed into the outer solar system. The distinct bright ray crater at the bottom of the image is the Tycho impact basin. Image Credit: NASA/JPL-Caltech

Tuesday evening, August 20th, we will see the rise of a full moon. It will reach a peak at 9:45 PM ET. But the title of "blue moon" has more to do with frequency than with color. A traditional blue moon is the appearing of a second full moon phase in a given calendar month. There is usually at least one blue moon in each calendar year, and there are two blue moons every 19 years.

But wait! The moon goes through its cycle of phases very 29.5 days and this full moon is on the 20th of the month. So this is cannot be the second full moon for August, and so is not a traditional blue moon. What gives?

Usually, when the moon is full, it passes either above or below Earth’s shadow, but sometimes, when it is perfectly aligned, it travels right through the shadow. This event is called a lunar eclipse. And depending on how well the earth, moon and sun are aligned, it could be a total or partial eclipse.