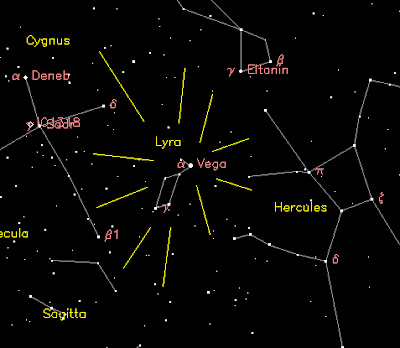 The above image depicts the radiant point of the Lyrid meteor shower. The Lyrid meteors will appear to radiate from apoint near Vega, the bright, blue-white star in the constellation Lyra (the Lyre). The outlines of the surrounding constellations are marked and labeled. The image was produced using Your Sky software by John Walker, available online at www.fourmilab.ch/yoursky/

It’s time, again, for the annual Lyrid meteor shower. Also called the April Lyrids, the meteors from this shower may be visible in the northern hemisphere from April 19 through 25 with the peak on Saturday/Sunday, April 21/22. A nearly-new moon on those dates will provide perfect dark-sky conditions for meteor watching.

This year forecasters estimate Lyrid rates of 10 to 20 per hour, with possible rates as high as 100 meteors per hour. Lyrids appear to originate from a point near the bright, blue-white star Vega in the constellation of Lyra (RA 18hrs 16min, Dec +34°).

The parent of this shower is Comet Thatcher (C/1861 G1). Meteors from this shower enter the atmosphere at 49 km/s, or 110,000 miles per hour. Most are of a modest brightness, but some can be as bright as the planet Venus and even leave in their wake a visible train of ionized gas.

Appearances of this shower have been traced back over 2,500 years. The earliest record of the Lyrid shower was in 687 BC. In 15 BC a spectacular Lyrid meteor storm was observed. One observer recorded that the "stars fell like rain." Brilliant Lyrid showers were also seen in 1803 and 1922, though an hourly rate of the meteors was not recorded.

Here are some helpful notes and tips for meteor watching...

Usually more meteors are seen near midnight and in early mornings, because during that time our part of Earth is facing in the direction of our orbital path, and we are heading into the meteor swarms. Best observing conditions occur with the absence of moonlight, usually when the Moon's phase is between waning crescent and waxing first quarter.

Observers preparing for an evening of observing should bring along a few things: a sleeping bag or blankets for warmth, a recliner or lawn chair, and a hot beverage to help cut the chill. Binoculars are not necessary but they help. Wide-field ones are the best.

In group observing for meteors, each person has his or her own section of the sky to patrol. Wide-field binoculars can help an observer confine his or her attention to their own piece of sky.


Meteor trails make interesting images. Also, amateurs with a shortwave radio receiver can "listen" to meteors. This is done by tuning the receiver to a very weak distant station, preferably above 15 megacycles. The volume is kept very low. When a meteor in the upper atmosphere ionizes a patch of air, creating momentary "reflector" for signals, the volume of the station's signal rises sharply. Doppler changes in pitch may occur. On a good morning, several hundred meteors may be heard.

Here are some neat things to include in your meteor-watching experience...
To learn more about meteoroids and other near-earth objects, check out NASA's Near Earth Objects Program: http://neo.jpl.nasa.gov/