With all of the recent news on meteors and Near-Earth Objects, I thought this would be an excellent time to dust off my old presentation on the topic and, of course, update some of the numbers along the way. So, here we go. The presentation will take a few installments to get through, so sit back and enjoy...

Near-Earth Objects (NEOs) are comets and asteroids that have been nudged by the gravitational attraction of nearby planets into orbits that allow them to enter the Earth's neighborhood. Composed mostly of water ice with embedded dust particles, comets originally formed in the cold outer planetary system while most of the rocky asteroids formed in the warmer inner solar system between the orbits of Mars and Jupiter. The scientific interest in comets and asteroids is due largely to their status as the relatively unchanged remnant debris from the solar system formation process some 4.6 billion years ago. The giant outer planets (Jupiter, Saturn, Uranus, and Neptune) formed from an agglomeration of billions of comets and the left over bits and pieces from this formation process are the comets we see today. Likewise, today's asteroids are the bits and pieces left over from the initial agglomeration of the inner planets that include Mercury, Venus, Earth, and Mars.

As the primitive, leftover building blocks of the solar system formation process, comets and asteroids offer clues to the chemical mixture from which the planets formed an estimated 4.6 billion years ago. If we wish to know the composition of the primordial mixture from which the planets formed, then we must determine the chemical constituents of the leftover debris from this formation process - the comets and asteroids.

Earth in the Crosshairs

With an average interval of about 100 years, rocky or iron asteroids larger than about 50 meters would be expected to reach the Earth's surface and cause local disasters or produce the tidal waves that can inundate low lying coastal areas.  On an average of every few hundred thousand years or so, asteroids larger than a kilometer could cause global disasters.  In this case, the impact debris would spread throughout the Earth's atmosphere so that plant life would suffer from acid rain, partial blocking of sunlight, and from the firestorms resulting from heated impact debris raining back down upon the Earth's surface.

Since their orbital paths often cross that of the Earth, collisions with near-Earth objects (NEOs) have occurred in the past and we should remain alert to the possibility of future close Earth approaches. It seems prudent to mount efforts to discover and study these objects, to characterize their sizes, compositions and structures and to keep an eye upon their future trajectories.

Because of the ongoing search efforts to find nearly all the large NEOs, objects will occasionally be found to be on very close Earth approaching trajectories.  Great care must then be taken to verify any Earth collision predictions that are made.  Given the extremely unlikely nature of such a collision, almost all of these predictions will turn out to be false alarms.  However, if an object is verified to be on an Earth colliding trajectory, it seems likely that this collision possibility will be known several years prior to the actual event.  Given several years warning time, existing technology could be used to deflect the threatening object away from Earth.  The key point in this mitigation process is to find the threatening object years ahead of time so that an orderly international campaign can be mounted to send spacecraft to the threatening object.  One of the techniques suggested for deflecting an asteroid includes nuclear fusion weapons set off above the surface to slightly change the asteroid's velocity without fracturing it.  High speed neutrons from the explosion would irradiate a shell of material on the surface of the asteroid facing the explosion.  The material in this surface shell would then expand and blow off, thus producing a recoil upon the asteroid itself.  A very modest velocity change in the asteroid's motion (only a few millimeters per second), acting over several years, can cause the asteroid to miss the Earth entirely.  However, the trick is to gently nudge the asteroid out of harm's way and not to blow it up.  This latter option, though popular in the movies, only creates a bigger problem when all the pieces encounter the Earth.  Another option that has been discussed includes the establishment of large solar sails on a small threatening object so that the pressure of sunlight could eventually redirect the object away from its predicted Earth collision.

No one should be overly concerned about an Earth impact of an asteroid or comet.  The threat to any one person from auto accidents, disease, other natural disasters and a variety of other problems is much higher than the threat from NEOs.  Over long periods of time, however, the chances of the Earth being impacted are not negligible so that some form of NEO insurance is warranted.  At the moment, our best insurance rests with the NEO scientists and their efforts to first find these objects and then track their motions into the future.  We need to first find them, then keep an eye on them. 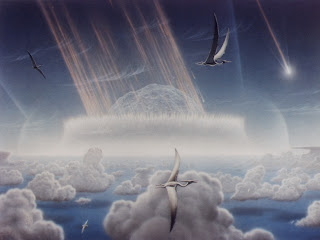 The above image is an artist's concept of the impact in Northwestern Ycatan. Artist: Don Davis

A large body of scientific evidence now exists that support the hypothesis that a major asteroid or comet impact occurred in the Caribbean region around the time of the Earth's geological boundary between the Cretaceous and Tertiary periods. Such an impact is suspected to be responsible for, or at least a contributor to, the mass extinction of many floral and faunal species, including the large dinosaurs, that marked the end of the Cretaceous period. This extinction is often described as the Cretaceous/Tertiary Extinction, or K-T Extinction. The geohydrological feature (Cenote Ring) of Northwestern Yucatan, was discovered through NASA Ames Remote Sensing technology, and represents a prime candidate for the impact site of a global catastrophic event. 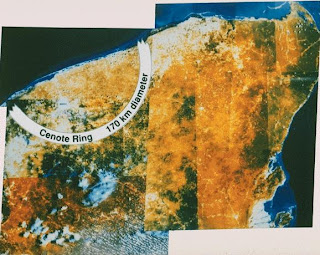 This is a radar image of the southwest portion of the buried Chicxulub impact crater in the Yucatan (pronounced “yoo-kah-TAHN”) Peninsula, Mexico (Chicxulub is pronounced “CHEEK-shoo-loob” and is named after a local village). The radar image was acquired on orbit 81 of space shuttle Endeavour on April 14, 1994 by the Spaceborne Imaging Radar C/X-Band Synthetic Aperture Radar (SIR-C/X- SAR). The image is centered at 20 degrees north latitude and 90 degrees west longitude. Scientists believe the crater was formed by an asteroid or comet which slammed into the Earth more than 65 million years ago. It is this impact crater that has been linked to a major biological catastrophe where more than 50 percent of the Earth's species, including the dinosaurs, became extinct. The 180- to 300-kilometer-diameter (110- to 180-mile) crater is buried by 300 to 1,000 meters (1,000 to 3,000 feet) of limestone. The exact size of the crater is currently being debated by scientists. This is a total power radar image with L-band in red, C-band in green, and the difference between C- and L-band in blue. The 10-kilometer-wide (6-mile) band of yellow and pink with blue patches along the top left (northwestern side) of the image is a mangrove swamp. The blue patches are islands of tropical forests created by freshwater springs that emerge through fractures in the limestone bedrock and are most abundant in the vicinity of the buried crater rim. The fracture patterns and wetland hydrology in this region are controlled by the structure of the buried crater. Scientists are using the SIR-C/X-SAR imagery to study wetland ecology and help determine the exact size of the impact crater.

The above image is a SIR-C Radar image of  Chicxulub Crater, Yucatan Peninsula, Mexico. The image was taken April 14, 1994. Image Credit: NASA

Spaceborne Imaging Radar-C and X-band Synthetic Aperture Radar (SIR-C/X-SAR) is part of NASA's Mission to Planet Earth. The radars illuminate Earth with microwaves allowing detailed observations at any time, regardless of weather or sunlight conditions. SIR-C/X-SAR uses three microwave wavelengths: L-band (24 cm), C-band (6 cm) and X-band (3 cm). The multi-frequency data will be used by the international scientific community to better understand the global environment and how it is changing. The SIR-C/X-SAR data, complemented by aircraft and ground studies, will give scientists clearer insights into those environmental changes which are caused by nature and those changes which are induced by human activity. SIR-C was developed by NASA's Jet Propulsion Laboratory. X-SAR was developed by the Dornier and Alenia Spazio companies for the German space agency, Deutsche Agentur fuer Raumfahrtangelegenheiten (DARA), and the Italian space agency, Agenzia Spaziale Italiana (ASI), with the Deutsche Forschungsanstalt fuer Luft und Raumfahrt e.v.(DLR), the major partner in science, operations, and data processing of X-SAR. Research on the biological effects of the Chicxulub impact is supported by the NASA Exobiology Program. 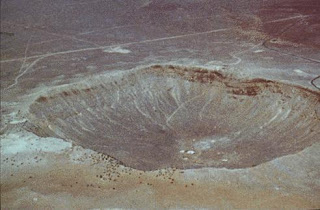 The above image is an view from the air of Barringer Meteorite Crater. Image Credit: NASA

The Barringer Meteorite Crater (also known as Meteor Crater) near Winslow, Arizona was the first crater to be identified as an impact crater. Between 20,000 to 50,000 years ago, a small asteroid about 80 feet in diameter impacted the Earth and formed the crater. The crater is the best preserved crater on Earth and measures 1.2 km in diameter. For many years, scientists had denied that there were any impact craters on Earth. The origin of this crater has been a source of controversy for many years. The discovery of fragments of the Canyon Diablo meteorite help prove that the feature was in fact an impact crater.

The purpose of NASA's Near-Earth Object Program is to coordinate NASA-sponsored efforts to detect, track and characterize potentially hazardous asteroids and comets that could approach the Earth. The NEO Program will focus on the goal of locating at least 90 percent of the estimated 1,000 asteroids and comets that approach the Earth and are larger than 1 kilometer (about 2/3-mile) in diameter, by the end of the next decade. In addition to managing the detection and cataloging of Near-Earth objects, the NEO Program office will be responsible for facilitating communications between the astronomical community and the public should any potentially hazardous objects be discovered.

As of April 22, 2012, 8931 Near-Earth objects have been discovered. Some 839 of these NEOs are asteroids with a diameter of approximately 1 kilometer or larger. Also, 1301 of these NEOs have been classified as Potentially Hazardous Asteroids (PHAs).

Potentially Hazardous Asteroids (PHAs) are currently defined based on parameters that measure the asteroid's potential to make threateningly close approaches to the Earth. Specifically, all asteroids with an Earth Minimum Orbit Intersection Distance (MOID) of 0.05 AU or less and an absolute magnitude (H) of 22.0 or less are considered PHAs. In other words, asteroids that can't get any closer to the Earth (i.e. MOID) than 0.05 AU (roughly 7,480,000 km or 4,650,000 mi) or are smaller than about 150 m (500 ft) in diameter (i.e. H = 22.0 with assumed albedo of 13%) are not considered PHAs.

This “potential” to make close Earth approaches does not mean a PHA will impact the Earth. It only means there is a possibility for such a threat. By monitoring these PHAs and updating their orbits as new observations become available, we can better predict the close-approach statistics and thus their Earth-impact threat.