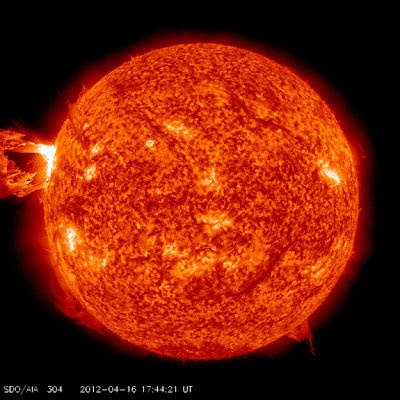 Around 17:45 UTC on Monday, April 16th, magnetic fields on the sun's northeastern limb erupted, producing one of the most visually-spectacular explosions in years. NASA's Solar Dynamics Observatory (SDO) recorded the blast at extreme ultraviolet wavelengths. The event began as a large solar prominence that extended from the sun’s photosphere out to the corona. The prominence then broke apart, producing a coronal mass ejection (CME). Thankfully, the eruption, which registered M1.7 on the peak flux solar flare scale, was not aimed toward Earth. However, at the Space Weather Laboratory of NASA's Goddard Space Flight Center, analysts studied the trajectory of the cloud and found that the CME will hit the following spacecraft:

…and the planets Venus and Mars could also receive a glancing blow.

A movie of the event has been created using data from SDO, and is now available online. The movie shows the explosion at 304 Angstroms, a wavelength which traces plasma with a temperature around 80,000 K (143,540 degrees F): http://www.youtube.com/watch?v=MhuLpZS6fss

On an ominous note, Monday’s magnetic eruption confirmed suspicions that an active region of significance is rotating onto the Earth-facing side of the sun. Stay tuned...

To learn more about SDO and the study of space weather, visit these URLS: