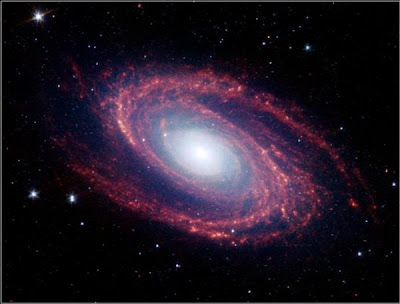 The above image shows the arms of the nearby galaxy Messier 81. In recent decades astronomers have thought that both the universe and galaxies are held together by the gravitational attraction of a huge amount of unseen material, now commonly referred to as dark matter. Image Credit: NASA/JPL/Caltech/Harvard-Smithsonian Center for Astrophysics

For the last couple of decades, conventional astronomy has held that there’s a mysterious, invisible substance called dark matter, and though we don’t know its precise nature, it permeates much of the universe. But now this convention may have a problem.

Dark matter was originally proposed to explain why the outer parts of galaxies, including our own Milky Way, spin more quickly than they should based on the visible objects and their gravitational interactions. Since then dark matter has become an essential part of theories of how galaxies formed and evolved. It has been widely assumed that dark matter constitutes about four-fifths of the mass in the universe.

But a new study has concluded that the mysterious dark matter is not there.  At least, not in or near our solar system. And that is a problem, because it should be everywhere in our galaxy. Oh, and it is greatly needed to resolve problems in many astronomical theories.

Researchers say this new study of star motion in the Milky Way, which is the most accurate study to date, found no evidence for dark matter in or near our solar system. In their study the scientists used multiple telescopes, including the European Southern Observatory’s (ESO’s) La Silla Observatory in Chile. The team mapped the motions of more than 400 stars up to 13,000 light-years from the Sun (a light-year is the distance light travels in a year). From that data they calculated the total mass, or weight, of material in the vicinity of the Sun, in a space four times larger than ever considered before.

The team measured the motions of many stars, particularly those away from the flat disc of stars that forms the bulk of the visible Milky Way. They then worked backwards using the laws of gravity to deduce how much matter of any type is present.
If dark matter existed, conventional theories hold it should surround our Milky Way like a halo, as it does other galaxies. The new findings don’t utterly rule out such a halo, but it would have to take a very unlikely shape to avoid penetrating our part of the galaxy, so things look awkward for dark matter theory, Bidin and colleagues suggested. Team members have also noted that the new results mean that attempts to detect dark matter on Earth by trying to spot the rare interactions between dark matter particles and “normal” matter are likely to fail.

The difficulties in clarifying the nature of dark matter, or in finding it on Earth, have annoyed scientists, but not to the point that most of them would doubt its existence. Future surveys, such as the European Space Agency’s Gaia mission, will be important in moving beyond these questions.

To learn more about the search for dark energy and dark matter, visit these URLs.