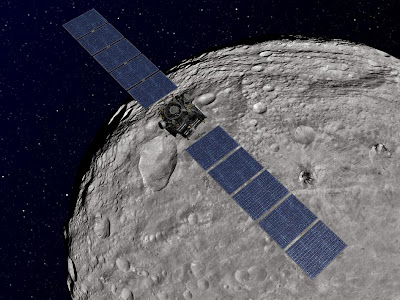 The above image is an artist's concept of NASA's Dawn spacecraft in orbit of asteroid Vesta. The depiction of Vesta is based on images obtained by Dawn's framing  cameras. Image credit: NASA/JPL-Caltech


It’s time for another NASA Dawn Mission update! The Dawn mission has received official confirmation that the current exploration of the asteroid Vesta has been extended by 40 days. Dawn achieved a stable orbit around Vesta in July 2011. The spacecraft was originally scheduled to depart in mid-July, but this extension means that Dawn will continue studying Vesta until August 26 (my birthday). And even with this extension at Vesta, the Dawn team still expects to reach Ceres at the originally scheduled target date in February 2015.

No new funding will be required for the extension because the team will be able to draw on financial reserves that have been carefully managed by the Dawn project. And the spacecraft’s efficient ion propulsion is to be credited for still getting to Ceres on time.

The mission extension allows for extra observations at Dawn’s current low-altitude mapping orbit (average altitude 130 miles or 210 kilometers). The additional time enables the gamma ray and neutron detector to build the best possible maps of the elemental composition of Vesta’s surface and improve data for the gravity experiment, the two primary scientific investigations at the low-altitude orbit. The spacecraft's camera and spectrometer are also obtaining additional high-resolution images.

Additional time will also be spent in the planned second high-altitude mapping orbit later this summer. When Dawn arrived at Vesta, much of the northern hemisphere was in shadow. But with the passage of time, more of that area will bask in sunshine. The Dawn mission team members have reported that they are very happy to take more advantage of this one-of-a-kind opportunity.

And now, the mission particulars…

Dawn's mission to Vesta and Ceres is managed by NASA's Jet Propulsion Laboratory, Pasadena, Calif., for NASA's Science Mission Directorate in Washington. JPL is a division of the California Institute of Technology in Pasadena. Dawn is a project of the directorate's Discovery Program, managed by NASA's Marshall Space Flight Center in Huntsville, Ala. UCLA is responsible for overall Dawn mission science. Orbital Sciences Corp. in Dulles, Va., designed and built the spacecraft. The German Aerospace Center, the Max Planck Institute for Solar System Research, the Italian Space Agency and the Italian National Astrophysical Institute are international partners on the mission team. For more information about the Dawn mission, visit: http://www.nasa.gov/dawn and http://dawn.jpl.nasa.gov