Cassini May Have Found the Next Bonneville 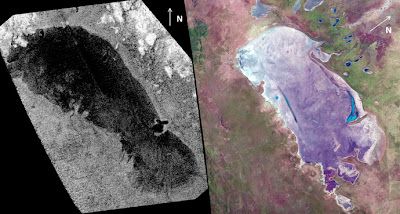 A new study analyzing data from NASA's Cassini spacecraft suggests that a Titan lake, known as Ontario Lacus, behaves in a manner very similar to what we call on Earth a salt pan.

Ontario Lacus is a hydrocarbon lake on Saturn's moon Titan. The lake is located near Titans south pole and it is composed of methane, ethane and propane. Ontario Lacus has a surface area of about 15,000 square kilometers (5,800 sq mi). Though it is about 20% smaller than its terrestrial namesake, Lake Ontario in North America, Ontario Lacus is the largest lake in Titan's south polar region.

A group of scientists led by Cassini associate Thomas Cornet of the Université de Nantes, France, found evidence for long-standing channels etched into the lake bed within the southern boundary of the depression. This find suggests that Ontario Lacus, previously thought to be a standing lake of liquid hydrocarbons, could actually be a depression that drains and refills from below, exposing liquid areas ringed by materials like saturated sand or mudflats. Cornet wrote about these findings in a paper, which he co-authored with Cassini team member Bonnie Buratti, and which was recently published in the planetary science journal Icarus.

The observed characteristics of Ontario Lacus make it very similar to the Etosha salt pan on Earth, a lake bed that fills with a shallow layer of water from groundwater levels that rise during the rainy season. This layer then evaporates and leaves sediments like tide marks showing the previous extent of the water.

While the liquid on Titan is not water, the cycle appears to work in a very similar fashion to the water cycle on Earth. Beyond Earth, Titan is the only other world known to bear stable liquids on its surface. There, the full hydrocarbon cycle is based on hydrogen, carbon and nitrogen, and takes place between the atmosphere, the surface and the subsurface. Titan's lakes are an integral part of this process.

This latest paper is part of an ongoing study of Ontario Lacus. Cassini has been observing the lake with multiple instruments and employing multiple methods of analysis to see if Titan, like Earth, changes with the seasons. During the time Cassini has been exploring the Saturn system, Titan's southern hemisphere has transitioned from summer to fall. The results of studies such as these emphasize the importance of comparative planetology in modern planetary sciences. Finding familiar geological features on other worlds allow the scientists to test their theories that explain their formation.

Now, if you will forgive me, the comparison of Ontario Lacus to the Etosha Plan is all very well and good. But this latest news has caused me to think of another Earth salt pan that is quite famous to lovers of speed—the Bonneville Salt Flats in Utah, where many land speed records have been set. Just dream with me for a moment. With its similar characteristics and much grander size, Ontario Lacus could very well be the next Mecca for land speed records in the solar system! Of course, I admit there would have to be some thought and work in order to make this happen. Let’s consider the basic requirements.

First, the surface pressure of Titan is 146.7 kPa, or about 1.45 times that of sea-level on Earth. So the Titan vehicle would need to be built with at least the structural integrity of an Earth submersible capable of withstanding a water depth of about 5 meters. Second, the surface gravity of Titan is just a little less than the Moon (Earth is 1.0 g, the Moon is about 0.165 g, and Titan is about 0.14 g). So the Titan vehicle would need to take some aerodynamic precautions (or should I say hydrodynamic precautions?) in order to make sure it didn't launch itself into the Titan atmosphere. But I think the reinforced vehicle construction for the whole surface-pressure issue would go a long way in helping to keep the wheels on the deck. Finally, and most importantly, there is the whole matter of perfecting the human spaceflight experience so that you could successfully survive the trip to Titan and back. I presume you would want to come back in order to celebrate your fame, sign your book deal and do all of those celebrity endorsements.

So, all of those issues notwithstanding, if someone did want to set some Titan surface speed records, Ontario Lacus would definitely be the place to do it!... Alright, stop laughing. I mean really. Come on now. It's a thought experiment! Anyway, it keeps me off the streets, and that's a very good thing.

And now, the Cassini-Huygens mission particulars...

The Cassini-Huygens mission is a cooperative project of NASA, the European Space Agency and ASI, the Italian Space Agency. NASA's Jet Propulsion Laboratory (JPL), a division of the California Institute of Technology in Pasadena, manages the mission for NASA's Science Mission Directorate, Washington. The Cassini orbiter was designed, developed and assembled at JPL. The RADAR instrument was built by JPL and the Italian Space Agency, working with team members from the US and several European countries. JPL is a division of the California Institute of Technology (Caltech) in Pasadena.

To learn more about Ontario Lacus, Titan and Cassini, visit these links.

The home page of the planetary science journal Icarus: http://icarus.cornell.edu/

For more information about the Cassini-Huygens Mission and the mission extensions, visit http://saturn.jpl.nasa.gov/