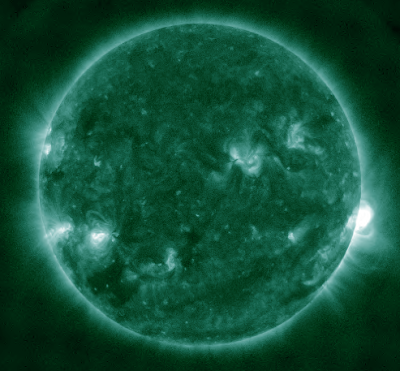 The above image was taken September 13th at 05:08:00 UTC by the Atmospheric Imaging Assembly (AIA), at 94 Angstroms, aboard the Solar Dynamics Observatory (SDO). This was the time of the long-duration C2 flare produced by Active Region 1564 (AR 1564), passed the southwest limb. Image Credit: SDO/AIA

For the end of September 12th and most of the 13th, the solar activity was low. Active Region 1564 (AR 1564) rotated around the west limb on the 12th, but produced the largest event; a long-duration C2 flare on the 13th at 05:08 UTC. AR 1569 increased in magnetic complexity and is now considered a beta-gamma type group. A filament eruption occurred and the associated coronal mass ejection (CME) had an estimated speed of 536 km/s. The forecast through September 16th: The solar activity is expected to be low with a slight chance for M-class flares, mainly from AR 1569.

Here at home, the geomagnetic field was mostly quiet with an isolated unsettled period observed on the 13th from 00:00 UTC to 03:00 UTC. Solar wind speeds increased from approximately 290 km/s to 400 km/s due to the effects of a weak coronal hole high-speed stream. The forecast through September 16th: The geomagnetic field is expected to be quiet on the 14th. Quiet to unsettled conditions are expected on the 15th due to effects from another coronal hole high-speed stream. Activity is expected to increase to unsettled levels on the 16th with a chance for active periods due the arrival of the CME associated with the 13th's filament eruption. Stay tuned...