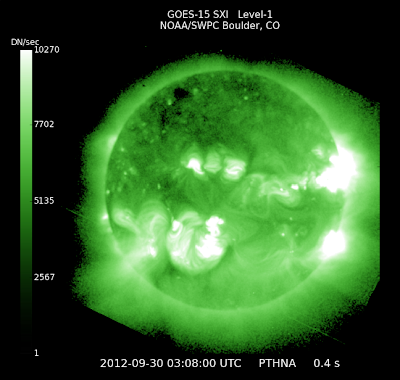 The above X-ray image of the sun was taken September 30th at 03:08:00 UTC by the Solar X-ray Imager (SXI) aboard the GOES-15 satellite. Image Credit: NOAA

For the end of September 28th and most of September 29th, the solar activity was low. Numerous weak C-class events were observed, mostly from Active Regions 1575 and 1577 (AR 1575, AR 1577). New region AR 1583 emerged on the disk as a simple bipolar group. No significant changes were observed elsewhere. No Earth-directed coronal mass ejections (CMEs) were observed during the period. The forecast through October 2nd: The solar activity is expected to be low with a slight chance for M-class activity.

Above Earth, the geomagnetic field was quiet. The Advance Composition Explorer(ACE) satellite measurements indicated a steady decline in wind speed from about 325 km/s to near 275 km/s while the Bz component of the interplanetary magnetic field did not vary much beyond +/- 3 nT. On the 29th at about 01:00 UTC, a solar sector boundary crossing from a negative (toward) to a positive (away) orientation was observed. The forecast through October 2nd: The geomagnetic field activity is expected to be at predominately quiet levels through about midday on the 30th. By late on the 30th, active levels with a chance for minor to major storm periods are expected due to the arrival of the Earth-directed CME observed early on the 28th. On the 1st, continued minor to major storm conditions are expected early in the day, decreasing to mostly quiet to unsettled levels with a chance for isolated active periods as effects from the CME wane. Predominately quiet to unsettled conditions are expected on the 2nd. Stay tuned...