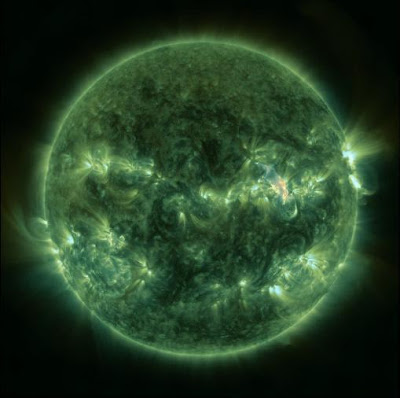 The above image was taken September 27th at 23:57:00 UTC by the Atmospheric Imaging Assembly (AIA) aboard the Solar Dynamics Observatory (SDO). This was during the time of a long-duration C3 solar flare, produced by Active Region 1577 (AR 1577), to the west (right) of center. The displayed image combined the AIA observations at 94, 131, and 171 Angstroms. Image Credit: SDO/AIA

For the end of September 27th and most of September 28th, the solar activity was low. Active Region 1577 (AR 1577) produced a long-duration C3 flare on the 27th at 23:57 UTC.  The event began with a filament eruption located northwest of and adjacent to the region with a subsequent dual ribbon flare. Associated with this event was an Earth-directed, asymmetric, full-halo coronal mass ejection (CME) which was first visible in the Solar and Heliospheric Observatory (SOHO) LASCO C2 and C3 imagery on the 28th at 00:18 UTC and 00:30 UTC, respectively. The plane-of-sky speed through both of the instruments' fields averaged 1034 km/s with a computed radial velocity of 872 km/s. Little change was observed following. No other Earth-directed CMEs were observed. The forecast through October 1st: The solar activity is expected to be at low levels with a slight chance for M-class activity.

At home, the geomagnetic field was quiet. The Advanced Composition Explorer (ACE) satellite measurements indicated a steady decline in wind velocity from about 400 km/s to near 325 km/s while the Bz component of the interplanetary magnetic field did not vary much beyond +/- 2 nT.  The greater than 10 MeV proton flux at geosynchronous orbit exceeded threshold on the 28th at 03:00 UTC, reached a maximum of 28 pfu at 04:45 UTC and decayed below threshold at 10:40 UTC. Near the end of September 28th, flux levels were still elevated at about 5 pfu.  This event was believed to be associated with the C3 flare observed late on the 27th. The forecast through October 1st: The geomagnetic field activity is expected to be at predominately quiet levels on the 29th and through midday on the 30th. By late on the 30th, active levels with with a chance for minor to major storm periods are expected due to the arrival of the Earth-directed CME observed early on the 28th. On October 1st, continued minor to major storm conditions are expected early in the day, decreasing to mostly quiet to unsettled levels with isolated active periods as effects from the CME wane. Stay tuned...