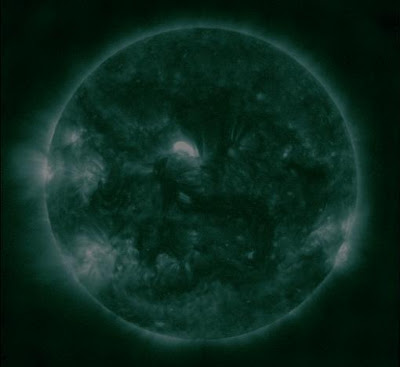 The above image was taken September 21st at 12:21:00 UTC by the Atmospheric Imaging Assembly (AIA), at 304 Angstroms, aboard the Solar Dynamics Observatory (SDO). This was during the time of a B8 solar flare, produced by Active Region 1573 (AR 1573) near the center of the disc. Image Credit: SDO/AIA

For the end of September 20th and most of the 21st, the solar activity was very low. The largest x-ray event was a B8 solar flare on the 21st at 12:21 UTC produced by Active Region 1573 (AR 1573). The largest spot group on the solar disc, AR 1575 (1575), remains near 250 millionths in area with a Beta magnetic configuration. Two asymmetrical partial halo coronal mass ejections (CMEs) were observed in the Solar and Heliospheric Observatory (SOHO) LASCO instrument. Both events were determined to be backside sourced, and so are not expected to impact Earth. The forecast through September 24th: The solar activity is expected to be very low to low.