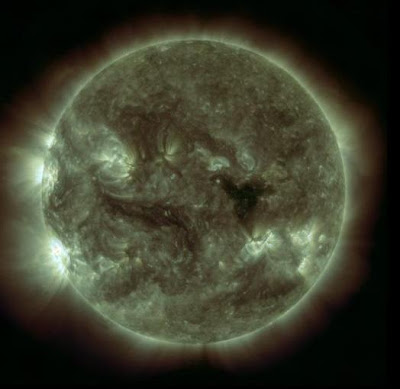 The above image was taken September 19th at 15:12:00 UTC by the Atmospheric Imaging Assembly (AIA) aboard the Solar Dynamics Observatory (SDO). The image is an actually a stacking of frames taken at multiple wavelengths. Specifically, 94, 131, 171, 193, and 211 Angstroms. These images were taken at the time of the C2 solar fare produced by Active Region 1576 (AR 1576) on the eastern (left) limb and to the south. The dark triangular shape just to the right of center is a coronal hole. Image Credit: SDO/AIA

For the end of September 18th and most of the 19th, the solar activity was low.  The new Active Region 1576 (AR 1576) produced a few C-class flares, the largest a C2/Sf on the 19th at 15:12 UTC. Both AR 1576 and AR 1575 continue to rotate onto the Earth-facing disc and appear to have beta magnetic characteristics.  No Earth-directed coronal mass ejections (CMEs) were detected. The forecast through September 22nd: The solar activity is expected to be at low levels with a slight chance for M-class activity.