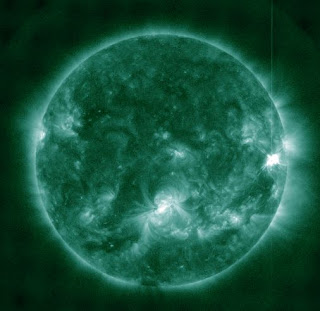 The above image was taken September 6th at 04:13:00 UTC by the Atmospheric Imaging Assembly (AIA), at 94 Angstroms, aboard the Solar Dynamics Observatory (SDO). This was the time of the M1 x-ray flare produced by Active Region 1560 (AR 1560). Image Credit: SDO/AIA

For the end of September 5th and most of the 6th, the solar activity was moderate (Wow. Not "low" or "very low"...). Active Region 1560 (AR 1560) produced an impulsive M1 x-ray flare on the 6th at 04:13 UTC, as well as occasional low-level C-class solar flares. No obvious changes were noted in AR 1560, but its closeness to the limb hampered any analysis. AR 1564 also produced occasional low-level C-class flares. It showed minor sunspot and penumbral growth in its interior portion. AR 1562 showed gradual spot and penumbral growth during the period. No new regions were designated. And no Earth-directed coronal mass ejection (CME) activity occurred during the period. The forecast through September 9th: The solar activity is expected to be low with a chance for an isolated M-class flare on the 7th. This will drop to a slight chance for the 8th and 9th.