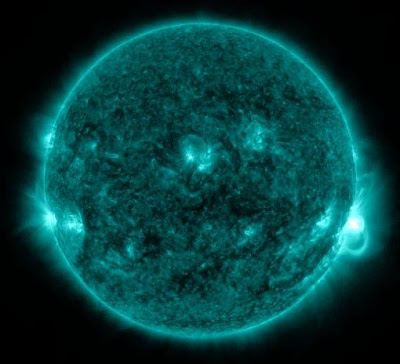 The above image was taken September 11th at 22:07:00 UTC by the Atmospheric Imaging Assembly (AIA), at 131 Angstroms, aboard the Solar Dynamics Observatory (SDO). This was the time of the long-duration C4 flare produced by Active Region 1564 (AR 1564) on the southwest limb. Image Credit: SDO/AIA

For the end of September 11th and most of the 12th, the solar activity was at low levels. Active Region 1564 (AR 1564) was the most active, producing several C-class flares as it rotated off the west limb. The largest flare produced was a long-duration C4 on the 11th at 22:07 UTC. And two new regions were designated: AR 1570 and AR 1571, the latter of which just rotated onto the facing disc. There were no Earth-directed coronal mass ejections (CMEs). The forecast through September 15th: The solar activity is expected to be low with a slight chance for an isolated M-class flare on the 13th. This M-class probability is expected to decrease for the for the 14th and 15th as AR 1564 rotates further beyond the limb.

Above Earth, the geomagnetic field activity was at mostly quiet levels. There was an isolated period of major storming at high latitudes during the 12th from 09:00 UTC to 12:00 UTC. A solar sector boundary crossing was observed at the Advanced Composition Explorer (ACE) spacecraft on the 11th at 22:00 UTC. The greater than 2 MeV electron flux at geosynchronous orbit reached high levels. The forecast through the 15th: The geomagnetic activity is expected to be quiet with a slight chance for unsettled levels on the 13th and 14th. An increase from quiet to unsettled levels with a slight chance for an active period is expected on the 15th due to a favorably positioned coronal hole. Stay tuned...