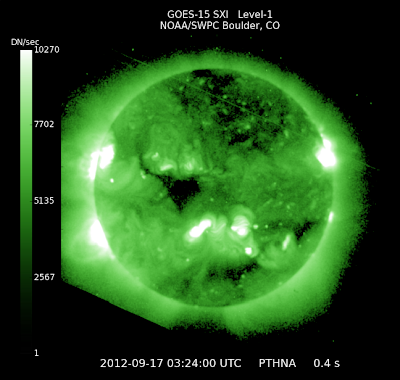 The above X-ray image of the sun was taken September 17th at 03:24:00 UTC by the Solar X-ray Imager (SXI) aboard the GOES-15 satellite. Note the coronal hole just to the left (east) of center. The high-speed stream from this hole should begin to affect Earth's magnetic field around September 19th. Image Credit: NOAA

For the end of September 15th and most of the 16th, the solar activity was very low. The new Active Region 1573 (AR 1573) produced occasional B-class flares as it rotated into view. AR 1566 produced a B-class flare as it approached the west limb. AR 1569 showed gradual spot and penumbral decay in its intermediate and trailer portions. New AR 1574, a small reverse-polarity group, was also designated. The was no Earth-directed coronal mass ejection (CME) activity. The forecast through September 19th: The solar activity is expected to be very low with a chance for a C-class flare.