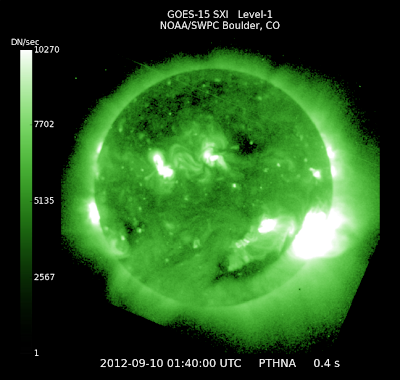 The above X-ray image of the sun was taken September 10th at 01:40:00 UTC by the Solar X-ray Imager (SXI) aboard the GOES-15 satellite. Image Credit: NOAA

At home, the geomagnetic field was quiet. The greater than 2 MeV electron flux at geosynchronous orbit reached high levels during the period. The forecast through September 12th: The geomagnetic field activity is expected to be at quiet levels with a chance for unsettled levels. Also, there is a slight chance for active levels on the 12th due to the onset of a coronal hole high-speed stream. Stay tuned...