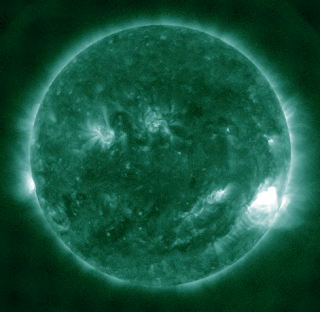 The above image was taken September 9th at 22:36:00 UTC by the Atmospheric Imaging Assembly (AIA), at 94 Angstroms, aboard the Solar Dynamics Observatory (SDO). This was the time of the M1 flare produced by Active Region 1564 (AR 1564). Image Credit: SDO/AIA

For the end of September 9th and most of the 10th, the solar activity increased to moderate levels. Active Region 1564 (AR 1564) produced an M1 flare on the 9th at 22:36 UTC. In addition, AR 1564 and AR 1567 produced occasional C-class flares. On the 10th, at 10:00 UTC, the Solar Dynamics Observatory (SDO) observed a filament eruption from the southwest quadrant of the sun's disc. And an associated coronal mass ejection (CME) was observed over the south pole with an estimated plane of sky speed of 420 km/s. But pending further analysis, that CME is not expected to affect Earth. A new region rolled into view and was designated AR 1569. It's an A-type Hax  sunspot group, although additional trailer spots appeared to be rotating into view. The forecast through September 13th: The solar activity is expected to be low with a chance for an isolated M-class flare.

Above Earth, the geomagnetic field activity was at quiet levels. A solar sector boundary crossing was observed at the Advanced Composition Explorer (ACE) spacecraft at about 13:00 UTC. The greater than 2 MeV electron flux at geosynchronous orbit reached high levels during the period. The forecast through September 13th: The geomagnetic field activity is expected to be at quiet levels with a chance for unsettled levels. Stay tuned...