Large Prominence Beyond the Western Limb... 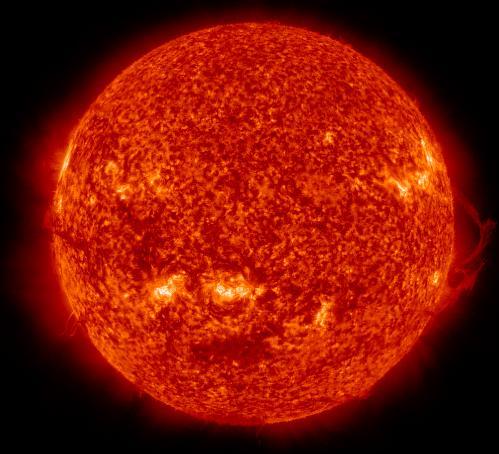 The above image was taken September 15th at 16:52:00 UTC by the Atmospheric Imaging Assembly (AIA), at 304 Angstroms, aboard the Solar Dynamics Observatory (SDO). This was during the time of the a large prominence beyond the western limb. Image Credit: SDO/AIA

For the end of September 14th and most of the 15th, the solar activity was very low. Low-level B-class x-ray flares occurred. Active Region 1566 (AR 1566) produced occasional B-class flares as it approached the sun's west limb. Occasional B-class flares also occurred from a yet-to-be-numbered small spot group that rotated into view late in the period. AR 1569 showed minor spot growth in its trailer portion and retained a beta-gamma magnetic configuration. And a new region was designated, AR 1572. One very spectacular event for the period was a large prominence which extended from beyond the sun's western limb, occurring on the 15th around 16:52 UTC. That being said, there were no Earth-directed coronal mass ejections (CMEs) observed. The forecast through September 18th: The solar activity is expected to be very low with a chance for isolated C-class flares.