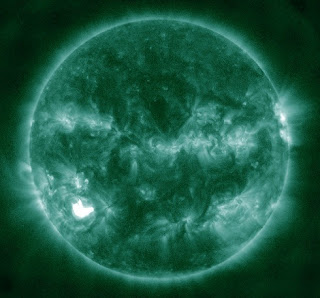 The above image was taken September 27th at 17:20:00 UTC by the Atmospheric Imaging Assembly (AIA), at 94 Angstroms, aboard the Solar Dynamics Observatory (SDO). This was during the time of a C4 solar flare, produced by an undesignated region on the southeastern (lower-left) portion of the sun's disc. Image Credit: SDO/AIA

For the end of September 26th and most of September 27th, the solar activity has been low. The largest solar flare was a C4 on the 27th at 17:20 UTC from an unnumbered region in the southeastern portion of the sun's disc. There are currently 9 numbered sunspot regions visible, but most have remained rather stable and quiet. A non-Earth directed full halo coronal mass ejection (CME) was observed in both STEREO A-B and LASCO imagery. The forecast through September 30th: The solar activity is expected to be at low levels with a slight chance for M-class activity.