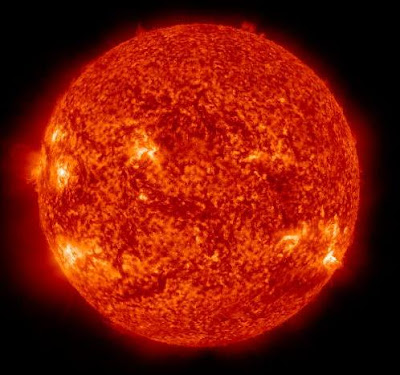 The above image was taken September 20th at 11:39:00 UTC by the Atmospheric Imaging Assembly (AIA), at 304 Angstroms, aboard the Solar Dynamics Observatory (SDO). This was during the time of a C1 solar flare, produced by Active Region 1574 (AR 1574) on the southwestern (lower right) limb. Image Credit: SDO/AIA

For the end of September 19th and most of the 20th, the solar activity was low. Active Region 1574 (AR 1574) produced a C1 solar flare on the 20th at 11:39 UTC. And AR 1574 has grown over the period, from a simple unipolar spot to a 4-spot bipolar group. All of the other spotted ARs had little change. No Earth-directed coronal mass ejections (CMEs) were observed. The forecast through September 23rd: The solar activity is expected to be at low levels with a slight chance for M-class activity.

Above Earth, the geomagnetic field was at predominately quiet to unsettled levels with a period of active conditions on the 19th between 21:00 UTC and 24:00 UTC. The period began with wind speeds, as measured at the Advanced Composition Explorer (ACE) spacecraft, steady at 400 km/s while the Bz component of the interplanetary magnetic field (IMF) was mostly south at about -10 nT. At about 23:00 UTC, wind speed and temperature indicated slight increases while IMF Bz began fluctuating between +8 to -6 nT. By the 20th at about 01:00 UTC, the phi angle changed from a positive (away) to a negative (toward) orientation. These changes were all indicative of a co-rotating interaction region in advance of a coronal hole high-speed stream. By the end of the period, wind velocities were steady at about 575 km/s while IMF Bz did not vary much beyond +/- 2 nT. The forecast through September 23rd: The geomagnetic field is expected to be at quiet to unsettled levels with isolated active intervals for the 21st and 22nd as a coronal hole high-speed stream (CH HSS) remains geoeffective. By the 23rd, mostly quiet to unsettled levels are expected as CH HSS effects wane. Stay tuned...