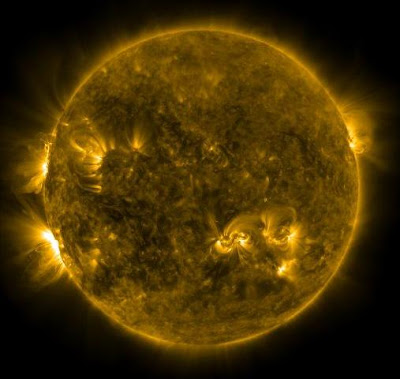 The above image was taken September 18th at 10:09:00 UTC by the Atmospheric Imaging Assembly (AIA), at 171 Angstroms, aboard the Solar Dynamics Observatory (SDO). This was during the time of a C1 x-ray event, produced by Active Region 1575 (AR 1575) on the eastern (left) limb. Image Credit: SDO/AIA

For the end of September 17th and most of the 18th, the solar activity was at low levels. Newly-designated Active Region 1575 (AR 1575) produced the only C-class flare, which was a C1 x-ray event at on the 18th at 10:09 UTC. This AR was also responsible for the two C-class flares seen yesterday. When AR 1575 rotated onto the Earth-facing disk, it had a beta magnetic classification. No Earth directed coronal mass ejections (CMEs) were detected. The forecast through September 21st: The solar activity is expected to be at low levels with a slight chance for M-class events.