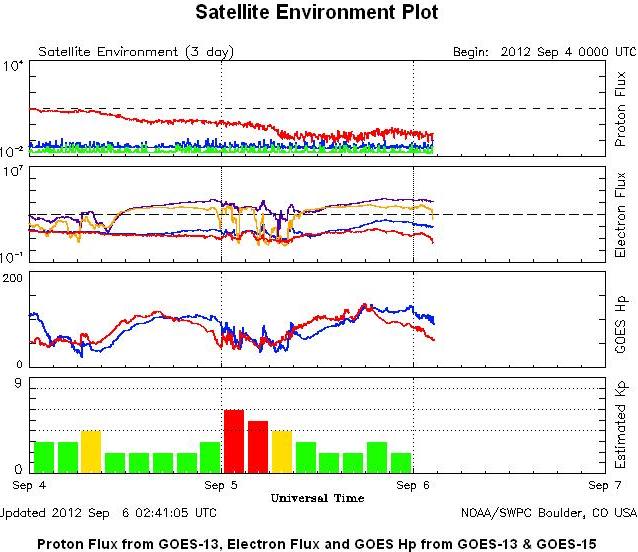 For the end of September 4th and most of the 5th, the solar activity was low. Active Region 1564 (AR 15464) produced occasional C-class solar flares including a C6 flare on the 5th at 03:47 UTC and a C7 flare at 08:06 UTC, neither of which were associated with significant radio emission. AR 1564 showed gradual sunspot and penumbral decay during the period, but retained a beta-gamma configuration due to polarity mixing in the vicinity of its intermediate spots. AR 1560 showed minor sunspot loss in its trailer portion during the period. It retained a change within its intermediate sunspots, but the change appeared to be dissipating. The remaining spotted region were unremarkable. No new regions were designated and Earth-directed coronal mass ejections (CMEs) occurred during the period. The forecast through September 8th: The solar activity is expected to be low, with a chance for an isolated M-class flare during the 6th and 7th.

Above Earth, the geomagnetic field activity ranged from quiet to major storm levels with a brief period of severe storm levels at high latitudes. An interplanetary shock passed the Advanced Composition Explorer (ACE) spacecraft on the 4th at 22:03 UTC, indicating the arrival of the CMEs observed on the 2nd. Field activity increased to major storm levels during the 5th over 00:00 UTC to 03:00 UTC following the shock, then decreased to minor storm levels during 03:00 UTC to 06:00 UTC. A further decrease to active levels occurred during 06:00 UTC to 09:00 UTC. Quiet to unsettled levels occurred during the rest of the period with active to minor storm levels detected at high latitudes. The forecast through September 8th: The geomagnetic field activity is expected to be at quiet to unsettled levels with a chance for active levels on the 6th due to possible weak coronal hole high-speed stream effects. Stay tuned...