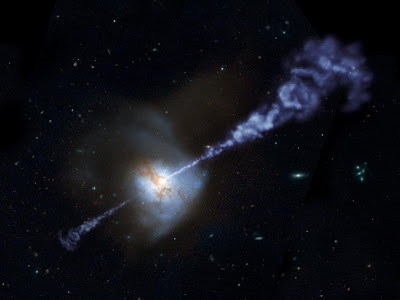 The above image is an artistically modified image of the local galaxy Arp 220, located 250 Mly (77 Mpc) from Earth. The original image was taken by the Hubble Space Telescope and helps to illustrate the results of the Herschel Space Observatory. Image Credit: NASA/JPL-Caltech

The Herschel Space Observatory has shown astronomers that galaxies with the most powerful, active black holes at their cores produce fewer stars than galaxies with less active black holes. The results are the first to demonstrate that black holes suppressed galactic star formation when the universe was less than half its current age. The Herschel mission is lead by the European Space Agency (ESA) with important contributions by NASA. The results of the study are in a paper that is published in this week's issue of the journal Nature.

Based on evidence to date, astronomers believe that supermassive black holes, weighing as much as millions of suns, reside in the hearts of all large galaxies. When gas falls upon them, the material is accelerated and heated around the black hole, releasing great amounts of energy. It is thought that earlier in the history of the universe, these giant, luminous black holes, called active galactic nuclei, were often much brighter and more energetic. In addition, astronomers think that star formation was livelier at that time.

But this new study of nearby galaxies suggest that active black holes can squash star formation. The revved-up, central black holes likely heat up and disperse the galactic reservoirs of cold gas needed to create new stars. These studies have only provided "snapshots" in time, however, leaving the overall relationship of active galactic nuclei and star formation unclear, especially over the cosmic history of galaxy formation.

The researchers compared their infrared readings with X-rays streaming from the active central black holes in the survey's galaxies, measured by NASA's Chandra X-ray Observatory. At lower intensities, the black holes' brightness and star formation increased in sync. However, star formation dropped off in galaxies with the most energetic central black holes. Astronomers think inflows of gas fuel new stars and supermassive black holes. Feed a black hole too much, however, and it starts spewing radiation into the galaxy that prevents raw material from coalescing into new stars.

To learn more about the study, visit the online home page of the journal Nature: www.nature.com