NuSTAR on Schedule for June Launch 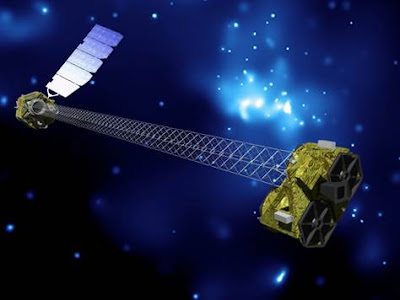 The above image is an artist's concept showing the NuSTAR X-ray telescope in orbit. NuSTAR uses two identical optics modules (shown at right) in order to increase sensitivity. The background shows an image of the galactic center as taken from the Chandra X-ray Observatory. Image Credit: NASA

Here is an update on pre-launch preparations for NASA's Nuclear Spectroscopic Telescope Array, or NuSTAR. To remind you, NuSTAR is a space-based X-ray telescope that will focus high energy X-rays to (1) conduct a deep survey for black holes a billion times more massive than our sun, (2) to understand how particles are accelerated to within a fraction of a percent of the speed of light in active galaxies, and (3) to understand how the elements are created in the explosions of massive stars by imaging the remains, or supernova remnants.

The mission was scheduled for a March 21 launch, but was postponed in mid-March because of software issues with the Pegasus launch vehicle. The mission is scheduled to launch no earlier than June 13 from Kwajalein Atoll in the Marshall Islands. The NuSTAR observatory will launch from the belly of Orbital Sciences Corporation's L-1011 "Stargazer" aircraft aboard the company's Pegasus rocket.

Technicians at Vandenberg Air Force Base in central California are busy installing the rocket's fairing, or nose cone, around the observatory. A flight computer software evaluation is also nearing completion and should be finished before the Flight Readiness Review, which is scheduled for June 1. A successful launch simulation of the Orbital Sciences' Pegasus XL rocket was conducted last week.

The mission plan is for NuSTAR and the Pegasus to be attached to the Stargazer aircraft on June 2. The aircraft will depart California on June 5 and arrive at the Kwajalein launch site on June 6. The launch of NuSTAR from the Stargazer is targeted for 8:30 AM PDT (11:30 AM EDT) on June 13.

NuSTAR is the eleventh mission of the NASA Small Explore satellite program (SMEX-11) and the first space-based direct-imaging X-ray telescope at energies beyond those of the Chandra X-ray Observatory and XMM-Newton. NuSTAR is led by the California Institute of Technology in Pasadena and managed by NASA's Jet Propulsion Laboratory, also in Pasadena, for NASA's Science Mission Directorate in Washington. The spacecraft was built by Orbital Sciences Corporation, Dulles, Virginia. Its instrument was built by a consortium including Caltech; JPL; the University of California, Berkeley; Columbia University, New York; NASA's Goddard Space Flight Center, Greenbelt,  Maryland; the Danish Technical University in Denmark; Lawrence Livermore National Laboratory, Livermore, California; and ATK Aerospace Systems, Goleta, California. NuSTAR will be operated by UC Berkeley, with the Italian Space Agency providing its equatorial ground station located at Malindi, Kenya. The mission's outreach program is based at Sonoma State University, Rohnert Park, California. NASA's Explorer Program is managed by Goddard. JPL is managed by Caltech for NASA.