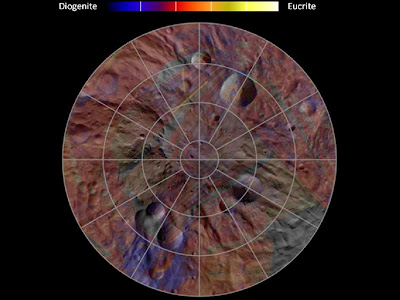 The above image shows the mineral distribution in the southern hemisphere of asteroid Vesta. The image was made from data obtained by NASA's Dawn spacecraft. Image Credit: NASA/JPL-Caltech/UCLA/INAF/MPS/DLR/IDA

A very interesting paper on asteroid 4 Vesta was published May 11th in the journal Science. The paper is authored by members of NASA's Dawn mission team. Launched in 2007, the Dawn spacecraft has been studying Vesta since its arrival in July of 2011.

The new paper supports the thinking that Vesta is a protoplanet left over from the earliest epoch of our solar system's formation. This is based on a comparison of Dawn's Vesta data with analyses of the howardite-eucrite-diogenite (HED) class of meteorites and the general agreement that HED meteorites came from a parent body with a differentiated -- layered -- internal structure.

The Dawn mission team has been studying a giant impact basin at Vesta's south pole. The team reasons that the creation of the basin would have been quite sufficient to produce the Vesta family of asteroids as well as the HED class of meteorites. This is supported by Dawn's spatially resolved mineralogy of the Vesta surface, which reflects the composition of the HED meteorites and confirms that Vesta's crust was formed by the melting of a chondritic parent body.

Vesta's mass, volume, and gravitational field are consistent with a core having an average radius of 107 to 113 kilometers. This indicates there must have been sufficient internal melting to separate the iron from other present materials so that the iron could gather in Vesta's core and the other materials could layer based upon their relative densities.

In short, Dawn's results confirm pre-mission theories that Vesta's structure became differentiated during its formation. In addirion, they support the  identification of HED meteorites as "children" of asteroid 4 Vesta.

The Dawn spacecraft will depart Vesta on August 26 (my birthday) . At that time it will head for its next study target, the dwarf planet Ceres, arriving in 2015.

Dawn's mission to Vesta and Ceres is managed by JPL for NASA's Science Mission Directorate in Washington. Dawn is a project of the directorate's Discovery Program managed by NASA's Marshall Space Flight Center in Huntsville, Ala. UCLA is responsible for overall Dawn mission science. Orbital Sciences Corp. in Dulles, Va., designed and built the spacecraft. The German Aerospace Center, the Max Planck Institute for Solar System Research, the Italian Space Agency and the Italian National Astrophysical Institute are international partners on the mission team. The California Institute of Technology in Pasadena manages JPL for NASA.

For more information about the Dawn mission, visit: www.nasa.gov/dawn and dawn.jpl.nasa.gov .

To read more about the Vesta discoveries, check out the online home page of the journal Science: www.sciencemag.org