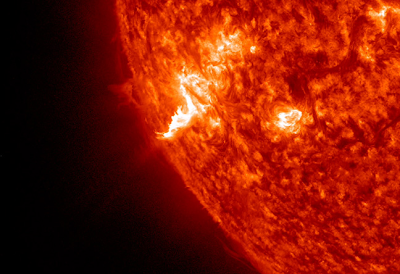 The above image shows an active region, source of at least half a dozen solar flares and numerous other small bursts of plasma over about 36 hours (Apr. 29 - May 1, 2012). The bright active region, viewed in extreme ultraviolet light by Solar Dynamics Observatory. Image Credit: , must have had a tangled magnetic field for it to erupt so frequently. None of the flares were major, but they made for a nifty movie. Image Credit: NASA/SDO/Goddard Spaceflight Center

Meanwhile, back on the sun...

It seems the huge sunspot AR1476, which has already produced M-class solar flares, appears to be on the verge of producing something even stronger. The sunspot's 'beta-gamma-delta' magnetic field has sufficient energy for X-class flares, which are the most powerful kind.

To review, a solar flare is an explosion on the sun that occurs when the energy stored in twisted magnetic fields (usually above sunspots) is suddenly released. Flares produce a burst of radiation across the electromagnetic spectrum, from radio waves to X-rays and gamma-rays.

To learn more about the sun and to stay current on solar activity, visit the mission home page of Solar Dynamics Observatory (SDO), sdo.gsfc.nasa.gov

...and the mission home page of the Solar and Heliospheric Observatory (SOHO), sohowww.nascom.nasa.gov