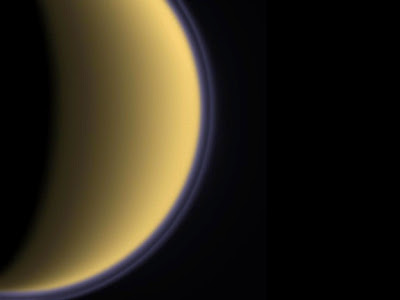 Above is a false-color image showing a thin, detached haze layer (purple line) that appears to float above Titan's main atmospheric haze. The image was taken July 3, 2004, by narrow-angle camera aboard the Cassini spacecraft. Credit: NASA/JPL/Space Science Institute

In the April 20th issue of the Astrophysical Journal, two papers are presented which review the methane production on Saturn’s largest moon, Titan, and attempt to estimate how long this process has been going on. Titan hides behind a thick, smoggy atmosphere. Scientists describe it as one of the most complex chemical environments in the solar system — cranking out hydrocarbons that rain down on Titan's icy surface and cloak it in soot. With a brutally cold surface temperature of around minus 270 degrees Fahrenheit (minus 170 degrees Celsius), the hydrocarbons form lakes of liquid methane and ethane.
Methane gas is the most important raw ingredient in Titan's chemical factory. This molecule is composed of one carbon atom and four hydrogen atoms. It should not last long because it's being continuously destroyed by sunlight and converted to more complex molecules and particles. But scientists are certain just how long they last, hence the two new papers.

The papers used data collected by two instruments on NASA's Cassini spacecraft in orbit around Saturn and one instrument on the European Space Agency's Huygens probe that landed on Titan's surface in January 2005. All three instruments were built at NASA's Goddard Space Flight Center in Greenbelt, Maryland. One paper uses infrared signatures (spectra) of methane from Cassini's composite infrared spectrometer to estimate how much "heavy" methane containing rare isotopes is present in Titan's atmosphere.

Isotopes are versions of an element with different weights, or masses. For example, carbon 13 is a heavier (and rare) version of the most common type of carbon, called carbon 12. Occasionally, a carbon-13 atom replaces a carbon-12 atom in a methane molecule. Because methane made with carbon 12 is slightly lighter, the chemical reactions that convert it to more complex hydrocarbons happen a bit faster. This means carbon-12 methane gets used up at a slightly faster rate than heavy carbon-13 methane, so the concentration of heavy methane in Titan's atmosphere increases slowly. By modeling how the concentration of heavy methane changes over time, the scientists predicted how long Titan's chemical factory has been running.
Scientists estimate that methane has a maximum age of 1.6 billion years, or about a third the age of Titan. But if methane escapes from the top of the Titan atmosphere, as some previous work has suggested, the age may be shortened to as little as 10 million years, which would be compatible with the observations of the Cassini mission.

Both scenarios assume that methane entered the atmosphere in one burst of outgassing, probably from the restructuring of Titan's interior as heavier materials sank towards the center and lighter ones rose toward the surface. But if the methane has been continuously replenished from a source, then its isotopes would always appear 'fresh' and the scientists can't restrict the age in their model. Possible sources include methane clathrates, basically a methane molecule inside a "cage" or lattice of ice molecules. Methane clathrates are found in the frigid depths of Earth's oceans, and some scientists think there could be an ocean of liquid water mixed with ammonia (acting as antifreeze) beneath Titan's water-ice crust. If this is so, methane might be released from its clathrate cages during the eruptions of proposed 'cryovolcanoes' of water-ammonia slurry, or more simply could slowly seep out through fractures in the crust.

The second Titan paper also models the time-evolution of methane. In this work, the concentration of the heavy methane is determined from measurements by Cassini's ion and neutral mass spectrometer, which counts molecules in the atmosphere of different masses (weights). Measurements made by the Huygens gas chromatograph mass spectrometer, which also counts molecules of different masses, were used to constrain the impact of escape on the heavy methane in the atmosphere.

Scientists compute that, even if methane has been replenished from the interior over time to match or exceed the amounts fed into the atmospheric chemical factory, the process must have been running for a maximum of one billion years. If the process had started any earlier, they would expect see a build-up of methane in the lakes on the Titan surface and in the atmosphere beyond what they observe today.

And now, the mission particulars…

The Cassini-Huygens mission is a cooperative project of NASA, the European Space Agency and the Italian Space Agency. The Jet Propulsion Laboratory, a division of the California Institute of Technology in Pasadena, manages the mission for NASA's Science Mission Directorate, Washington.

To read more on these papers, visit the Astrophysical Journal: iopscience.iop.org/0004-637X

To learn more about the Cassini-Huygens mission and spacecraft, visit: saturn.jpl.nasa.gov  and  www.nasa.gov