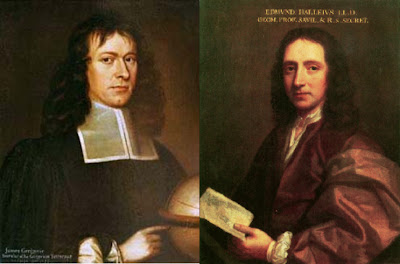 In the above portraits, James Gregory is on the left (artist and date unknown) and Edmund Halley is on the right (1687 by Thomas Murray). Image Credit: The portraits are in the Public Domain.

In 1663, Scottish mathematician and astronomer James Gregory (1638 - 1675) published a work he entitled Optica Promota (The Advance of Optics). In his work, Gregory analyzed the properties of lens and mirrors, substantially developed Johannes Kepler’s theory of the telescope, proposed a new telescope design, and made other observations along the way.

One of the observations Gregory made was that the transits of Mercury and Venus could be used to determine the distance between Earth and the sun. He explained that multiple observations of a specific transit, at widely spaced points on the surface of the earth, could be used to calculate the solar parallax — using triangulation — and from that, determine the distance from Earth to the sun.

Gregory's work came one year after the posthumous publication of Jeremiah Horrocks' observations and calculations from the 1639 transit of Venus. Perhaps Gregory was aware of Horrocks, or perhaps the realization of the usefulness of solar transits was just gaining momentum. Whatever the case, the notion caught the attention of a young Edmund Halley (1656 - 1742).

In 1677, Halley traveled to St. Helena, a volcanic island in the . From this point, on November 7th, Halley made the first careful observations of the transit of Mercury. But Halley was later disappointed to learn that few others had done the same. In a letter written by John Flamsteed to Johannes Hevelius the following year, Flamsteed reported there were only three observers of the 1677 Mercury transit. In addition to Halley on St. Helena, Richard Towneley observed from , and Jean Charles Gallet observed from . Needless to say, Halley was not satisfied with the resulting calculations.


In 1678, Halley proposed that more accurate measurements could be made using a transit of Venus. Halley pushed for a coordinated international effort that would ensure a large pool of data from which to calculate a more accurate solar parallax, and thus a more accurate distance to the sun. The next transit of Venus was expected in 1761. Sadly, Halley would not participate in the event himself, for he died nineteen years prior.


The next transit of Venus will occur over June 5-6. To learn more, visit these links.