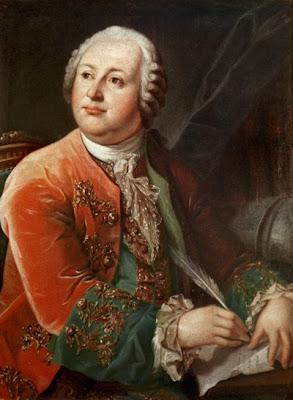 The above image is a portrait of Mikhail Lomonosov, painted in 1787 by L. S. Miropol'sky, copied from an original work by G. Prenner. Image Credit: The image is in the Public Domain.

During the 1761 transit of Venus, the Russian polymath, scientist and writer Mikhail Lomonosov (1711 – 1765) took his measurements from the Petersburg Observatory in . Lomonosov had hoped to find the planet’s diameter by measuring the size of its dark outline. He was able to determine that Venus was similar in diameter to Earth, but the precision of his measurement was hampered by the fact that the edges of the planet’s disc were not sharp, but fuzzy and indistinct. And this led Lomonosov to another discovery… Venus had an atmosphere!

In addition to the disc of Venus being fuzzy, Lomonosov detected the refraction of solar rays and inferred that only refraction through an atmosphere could explain the appearance of a light ring around the part of Venus that had not yet come into contact with the sun’s disc during the initial phase of the transit. In his writings, Lomonosov concluded that Venus had “an atmosphere equal to, if not greater than, that which envelops our earthly sphere.”


The next transit of Venus will occur over June 5-6. To learn more, visit these links.