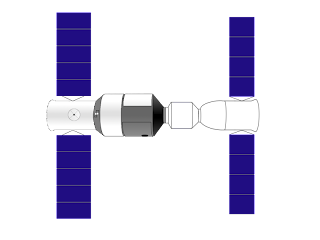 On May 11th, French astrophotographer Thierry Legault posted online an image of the sun which included the silhouette of China's experimental space station, Tiangong-1. The spacecraft was passing across the face of the sun near the giant sunspot AR1476.

Tiangong-1 is much smaller than the International Space Station, but it can be seen with the naked eye shining in the night sky as brightly as the stars of the Big Dipper. The image by Legault may be seen online at this URL: legault.perso.sfr.fr/transit_tiangong1_120511.html

Tiangong-1 (meaning “Heavenly Palace 1") is a Chinese space laboratory module which is being used as an experimental test-bed to demonstrate the rendezvous and docking capabilities needed to support a space station complex. The Tiangong-1 spacecraft was launched by a Long March 2F/G rocket on September 29, 2011. Tiangong-1 is part of the Tiangong program, which has the goal of placing a larger, modular station into orbit by 2020. Tiangong-1 will be deorbited in 2013, and replaced over the following decade by the larger Tiangong-2 and Tiangong-3 modules.