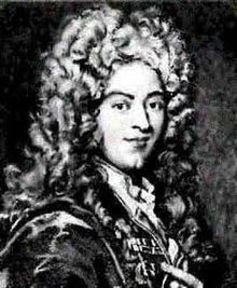 The above image is a portrait of Guillaume Le Gentil (1725 - 1792). The date of the original painting and the artist is unknown. Image Credit: The image is in the Public Domain.

For the 1761 transit of Venus, French astronomer Guillaume Le Gentil (1725 – 1792) tried sailing to Pondicherry in India. But when Le Gentil learned of the British occupation there, he turned back for Île de France (now Mauritius) in the Indian Ocean off the southeast coast of Africa. He was aboard a rolling ship when the day came, and so was not able to make proper observations of the transit.

After having come this far, Le Gentil thought he might as well stay and wait eight years for the 1769 transit of Venus. While waiting, Le Gentil spent some of his time mapping the eastern coast of Madagascar, the large island nation located between Île de France and the southeastern coast of Africa.

Le Gentil decided to observe the 1769 transit of Venus from Manila in the Philippines, but he encountered hostility from the Spanish authorities there. Le Gentil then decided to head back to Pondicherry, which had been his original choice for the 1761 transit, and which had been restored to France by a peace treaty in 1763.

Le Gentil arrived in Pondicherry in March 1768. He built a small observatory and patiently waited. During the month which led up to the transit, the weather was beautiful. Le Gentil had every reason to anticipate a great success.

But on the day of the transit, June 4, 1769, the skies became overcast an Le Gentil saw nothing. Years of waiting far from his home, two transits of Venus passed, and Le Gentil did not even have one recorded observation to take back to France. His disappointment drove him to the brink of insanity.

At last Le Gentil recovered enough sense and strength to return to France. But the return trip was delayed by dysentery. Later, his ship was caught in a storm and Le Gentil was dropped off at Île Bourbon (Réunion) just southwest of Île de France. There he had to wait until a Spanish ship would take him home.

Le Gentil finally arrived in Paris October 1771, eleven years after he had departed for the 1761 transit. But he soon learned that during his long absence he had been declared legally dead. As a result, someone else was given his seat in the Royal Academy of Sciences, his wife remarried, and all of Le Gentil's relatives eagerly divided his estate.

Le Gentil pursued lengthy litigation and the intervention of King Louis XV was ultimately required before normalcy was reached. In the end, Le Gentil got back his seat in the academy, he remarried, and apparently lived happily for another 21 years until his death.